Barcelona traditional foods, secrets to eat like a local 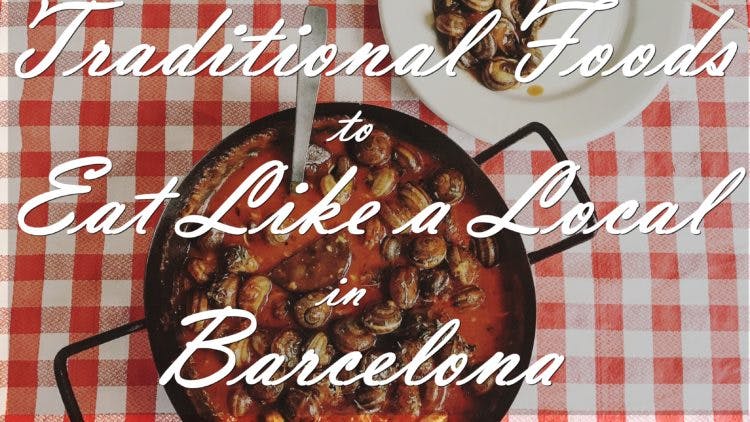 Barcelona city has managed to mark its strong position on the foodie map for a long time. Catalan cuisine is famous worldwide for its amazing flavors and sufficient portions. People from all around the world visit this part of Europe to taste dishes that are entirely different and innovative in taste, presentation, and style.

The culinary world wouldn’t be the same without Barcelona’s traditional foods. As we run Food Tours in Barcelona, we have eaten plenty of tapas and talked to local food connoisseurs who told us the secrets about it. Whether you are up for trying the rich botifarra sausages with romesco sauce or the typical Fideua dish, your taste buds are going to give a big shout once you try these mouth-watering Barcelona traditional dishes. Let’s find out more about them.

No time to try them all? You might want to join one of our Food Tours to try a few in one shot!

The best thing about Catalan food is that they have still held on to their ancestor’s recipes. The people in the old times valued food more than we do now. They had a special interest in healthy and wholesome dishes. The Catalan traditional food showcases a similar idea and offers food that is sufficient in quantity and good in quality.

Have you tried century years old Catalan cod-fritters? This is a dish that has its origins in the 13th century and that it is usually found in Barcelona Markets, it is made of a mix of cod, parsley, garlic and flour which is deep fried in olive oil. 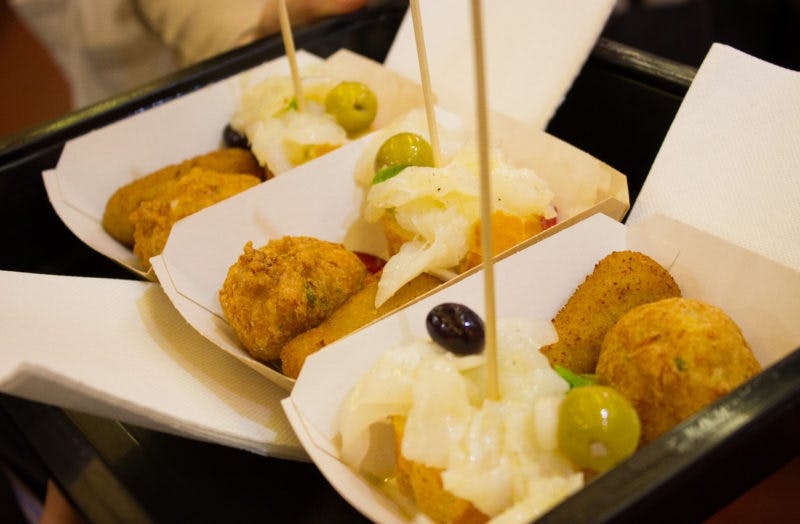 The second best thing that makes Barcelona’s food exquisite is the ingredients used in it. Dishes like “Pa amb tomaquet” (bread with tomato) are made from fresh and healthy ingredients. Barcelona is known for its delicious tomatoes, the use of olive oil into foods and the routine supply of sea products from the Mediterranean side. Here we recommend you go to the basics and try a delicious bread with tomato which you can pair with artisan cheese, Iberian ham, Catalan wines or simply eat it alone, it is delicious! This typical tapa is found in Barcelona bars and it is a kids´local favorite!

Tip: at genuine establishments in Barcelona, you will always have to make your own ¨pa amb tomaquet¨, that’s the local custom. 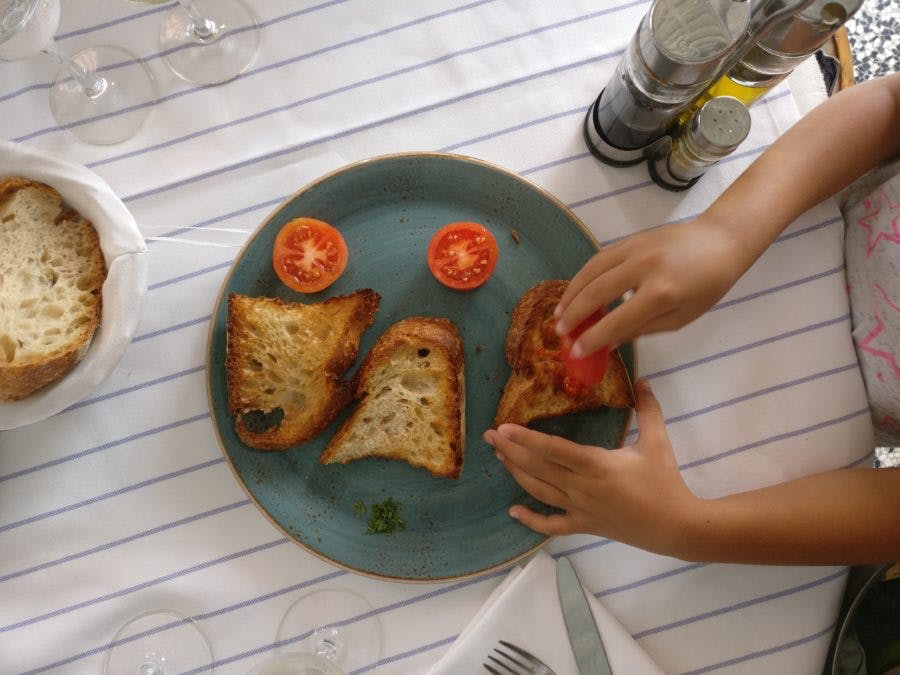 Food lovers know what it’s like to eat a portion of healthy food in a warm environment. The traditional food of Barcelona is made available in a traditional and yet trendy style so that it attracts the diners more than the ordinary food. The people serving food have a huge smile on their face and are passionate about their cooking which influences the tourist’s mood as well.

Eating patatas bravas at an iconic restaurant such as El Sortidor de la Filomena Pages it is an unforgettable experience in Barcelona. Despite the fact that some would argue that this is more a ¨Madrid traditional dish¨, in Barcelona locals have twisted the original recipe. The same fried potatoes are topped with aioli and the spicy sauce is made of dry tomatoes, almonds, chili, paprika, and olive oil. In the rest of the country, the potatoes are served only with a spicy tomato-based sauce. 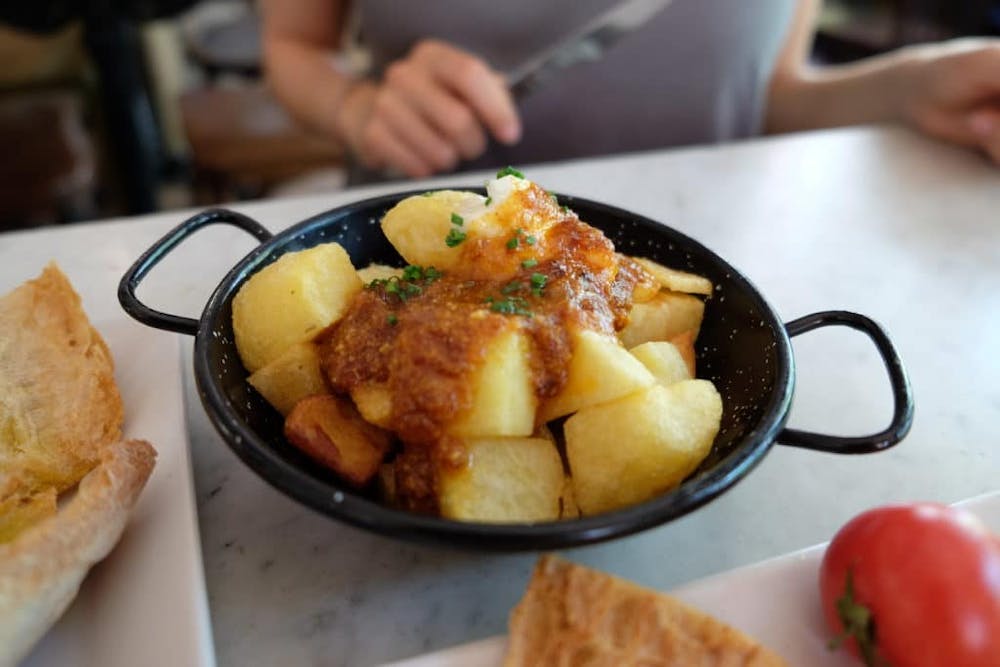 The use of fresh vegetables from Barcelona Markets and fresh local spices makes the cooking experience even more interesting. Spices were brought by the Arabs to the Iberian Peninsula centuries ago, and as Catalan gastronomy absorbs quite well the good side of cultures, one dish that originates in Lleida was simply enhanced to the next tasting level. Go for Cargol a la Llauna, a pot of spiced snails in a spiced tomato sauce at La Tomaquera restaurant. Seriously! 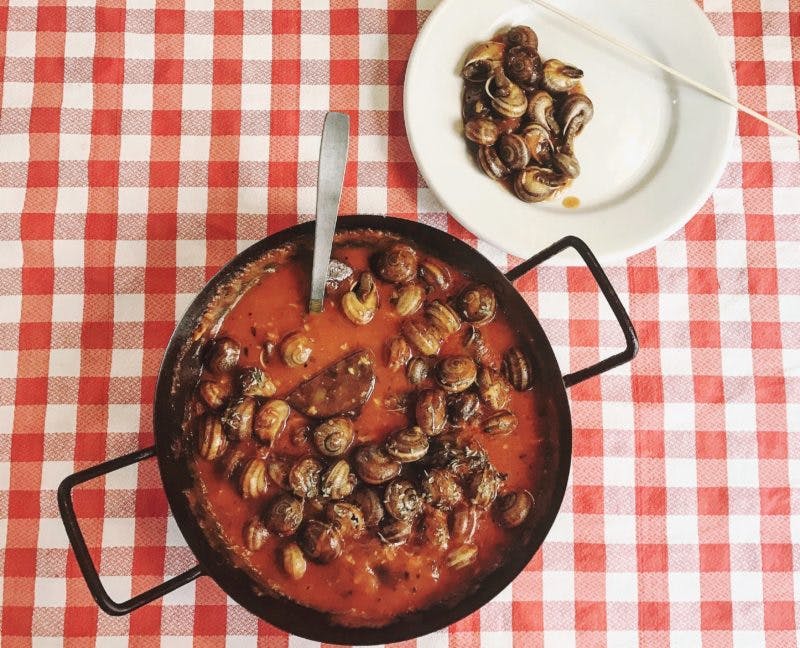 ARROS OR FIDEUA ∼ the reinvention of Paella in Barcelona

The cuisine in Catalonia reflects the spirit of a place that was very much a thoroughfare and place of entrance for different cultures, preferring to incorporate that than resist other styles. The first Catalan recipes date to the 14th century, and nowadays modern chefs have just made innovation but only to enhance the flavors even more with fresh ingredients available at the Barcelona markets where you can find spots for eating as well. This is also a trend in the country, putting Catalan traditional foods at the top of any visitor´s agenda. Try a local Arros, a local version of paella, or Fideua, paella´s little sister at any of these seafood restaurants in Barcelona. There are plenty of variations on this dish, but it all comes to fresh seafood and vegetables. 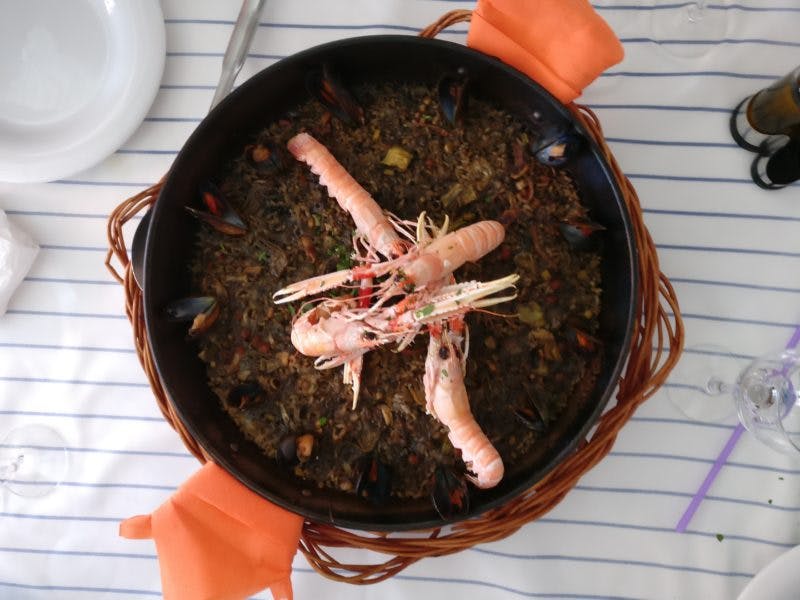 Are you not up for a full heavy meal? An aspect of the Barcelona traditional foods is that people share side dishes for brunch, lunch or dinner, this is the art of tapear, and we really love doing this, because it is a way to share and to secure a space in your stomach for dessert. After enjoying different arrays of dishes that can be perfectly paired with local wines or water from the nearby Montseny springs you get to the subliminal moment to order dessert. Crema Catalana is our pick, similar to creme brulee, it is made of egg yolks, cornflour, milk, and orange zest.  It is one of the oldest desserts known in Europe, dating to Roman times before Christ.

One of our favorite spot to eat it this traditional dessert is Ca L`Isidre (National Prize of Gastronomy in 2017). 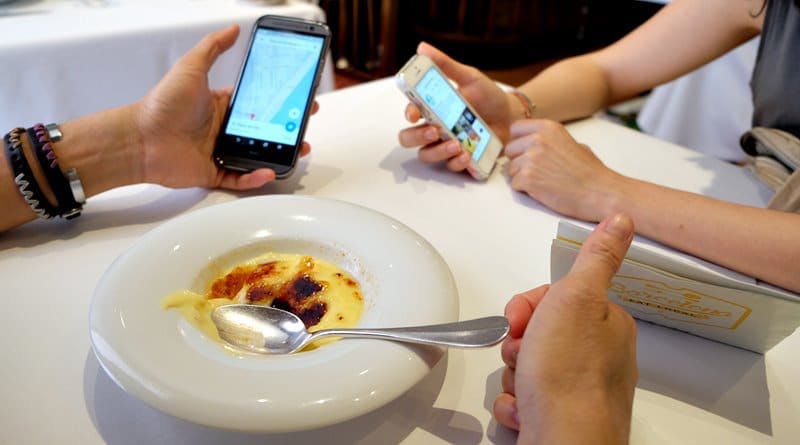 MEL I MATO ~ the medieval epitome of simplicity

Mel i Mato stands for honey and mato cheese. It is another traditional dessert from Barcelona that is eaten since the middle age. It consists of fresh cheese from cow or goat’s milk without salt topped with honey and nuts.

Back in the 60s the concept of tapas starting to become quite something within Spain, and then to the rest of the world as we know nowadays. There are few legends behind The Bombas, an iconic tapa from La Barceloneta District. One says that the Barceloneta residents wanted to make a difference in gastronomy within Barcelona and that they twisted the classical croquette into a round ball with minced meat inside and topped with a distinctive spicy sauce, and hell they made a difference! Do not miss trying one of the quintessential Barcelona tapas, you can do that by joining our Bodegas and Tapas Experience, an evening full of stories, traditional drinks and more foods to try! 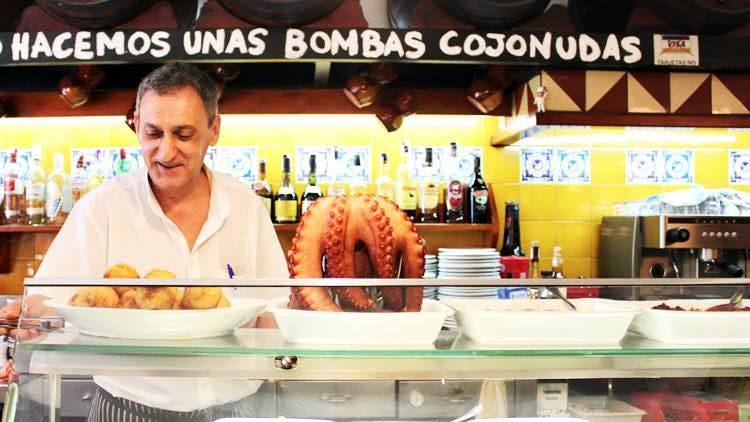 Cod is an important part of Catalonian gastronomy. On this dish, cod is cooked at a slow temperature in the oven. On the side, a sauce, similar to the French ratatouille, is prepared with onion, vegetables, garlic, and tomatoes. The sauce is added on top of the fish at the time of serving. The best spots to try this dish is at food stalls across Barcelona Food Markets.

FRICANDO ~ the most tender meat dish of Catalan Cuisine

When it is “mushroom” season, everyone buys veal and ask grandmas to prepare their best version of Fricando. The meat is cooked on a rich mushroom sauce and has an intense flavor. It is a great dish to pair with a glass of Priorat Wine. 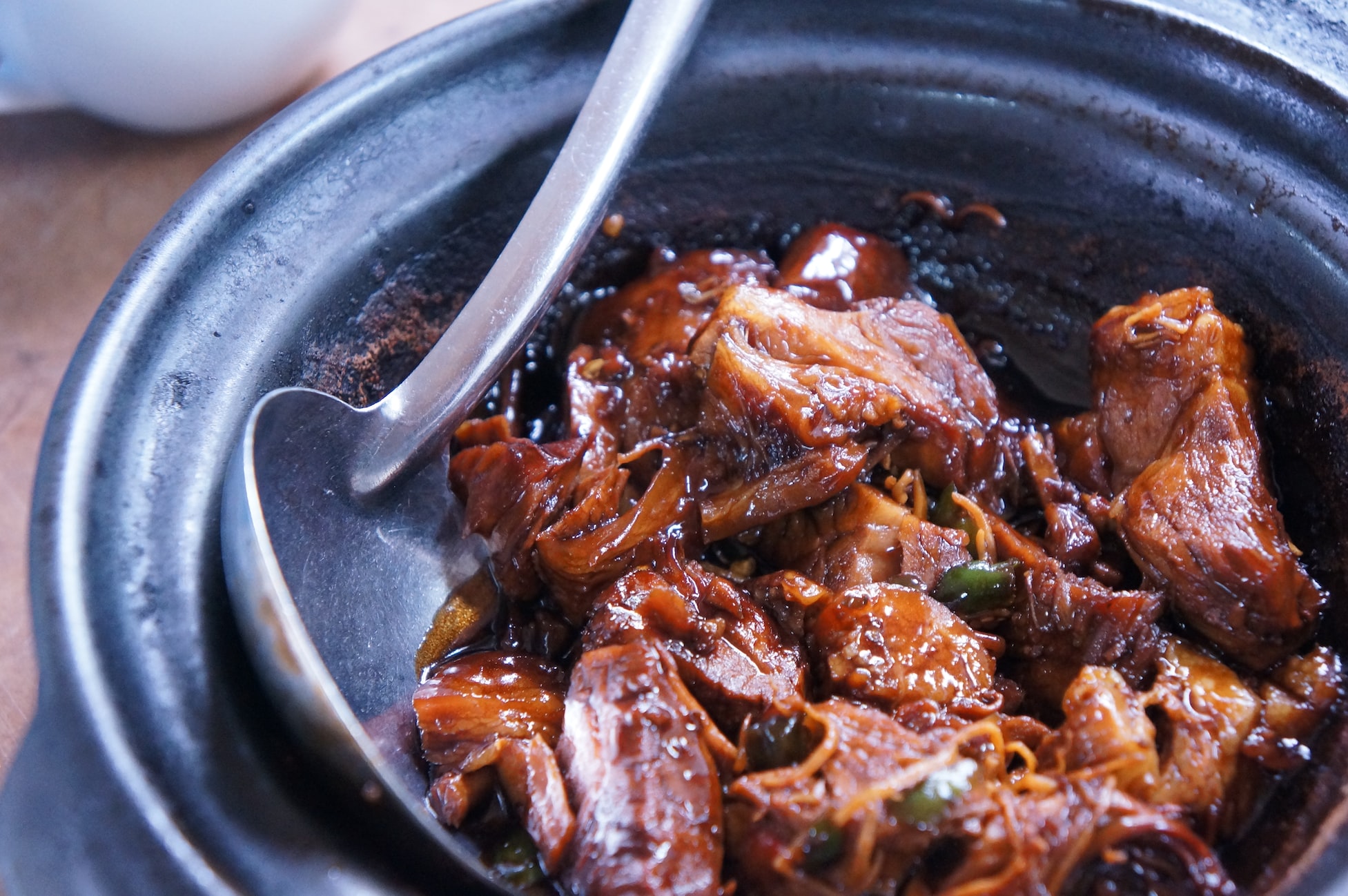 Who? But the Catalan, would have thought that mixing meatballs with cuttlefish would taste delicious? This is another dish to pair with a glass of strong wine, meatballs are cooked with cuttlefish in a rich gravy sauce and the result is amazing. Actually is one of those dishes that local call the “mar i muntanya” (sea and mountain).

CANELONS ~ the Catalan version of the Italian cannelloni taste even better!

On 26th December most families are left with a good chunk of meat. Here in Catalonia, people prepare a stew with that leftover meat and use it to fill in the canelons (or cannelloni), the rest is the same as the Italian recipe (topped with bechamel sauce), which actually uses minced meat. The taste is different, and you should discover it by yourself.

FAVES A LA CATALANA ~ beans that will make you taste heaven

Another usual suspect found at Catalan tables is Faves a la Catalana. A dish made of fava beans, stock and a bit of botifarra negra (black sausage) and cooked in an earthenware dish. It is an explosion of flavors and a great winter dish.

BOTIFARRA AMB MONGETAS ~ taste the flavors of the Catalan countryside

Botifarras is a traditional sausage from Catalonia which is manufactured in the countryside. Botifarra amb mongetas is a very simple and effective dish. Botifarras are grilled and served with haricot beans. It works pretty well after a hike. We love pairing it with a Penedes Wine.

Did you know that Calçots is a type of onion that has a registered EU Protected Geographical Indication? And that is considered a delicacy in Catalonia? This long stemmed green onion grows between November and March and is cooked on an open fire and is eaten with romesco sauce, which is made of red peppers, dry tomato, and almonds. To eat Calçots you need to use a bib and stay on two legs. 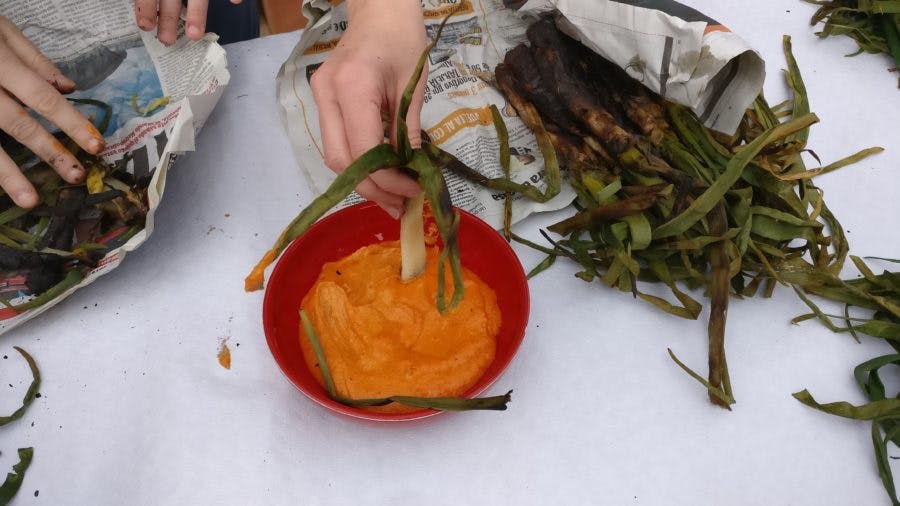 One of our favorites foods from Barcelona that is consumed since medieval days. Fresh spinach is sauteed in olive oil together with raisins and pine nuts. It is so simple, tasty and healthy. 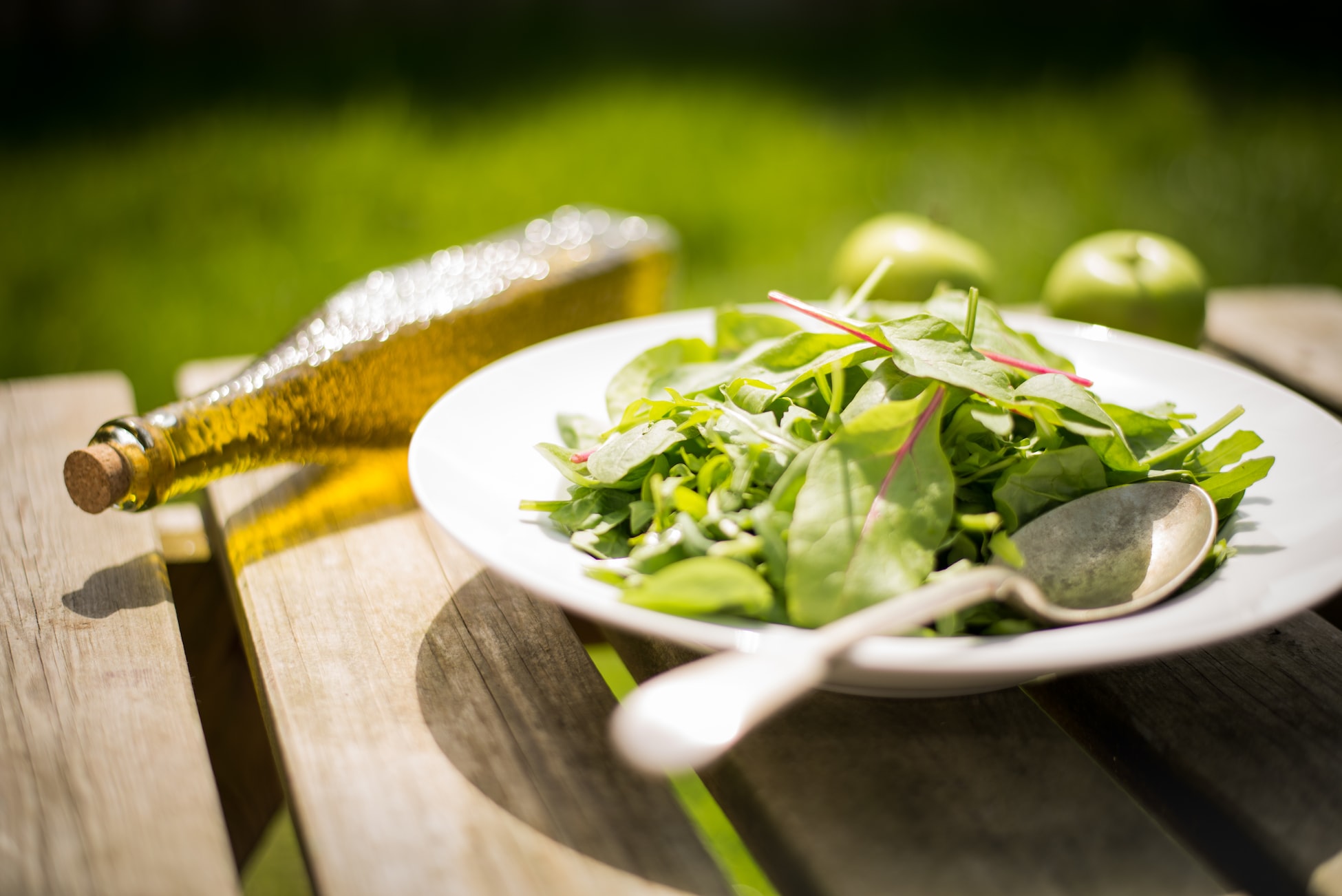 The traditional food in Barcelona is, without a doubt, delicious but what’s more interesting about these food items is that they offer a lot of health benefits. Nearly all the dishes contain fresh vegetables like tomatoes, onions, garlic, and seasonal veggies. Olive oil cuts down the unhealthy effects of saturated cooking oil. Each traditional dish is a combination of protein and vegetables. Did you hear about the famous Mediterranean diet? Well in Barcelona everyone practices it on a daily basis, eating plenty of delicious and healthy tapas.

We hope you enjoyed reading about the Barcelona traditional foods and its secrets, and in case you are really into diving on Barcelona best gastronomy, why not join one of famous our culinary experiences? Our signature food tour in Barcelona´s foodie districts Sant Antoni and El Poble-sec wanderlust into the origins and trends of Catalan gastronomy. Our Bodegas and Tapas Tour at the Gothic and Barceloneta districts provides a terrific insight into the world of tapas at iconic Barcelona Old Taverns. You can check them out below!