The Barcelona Gothic’s Quarter Bucket List: 17 Amazing Things to Do 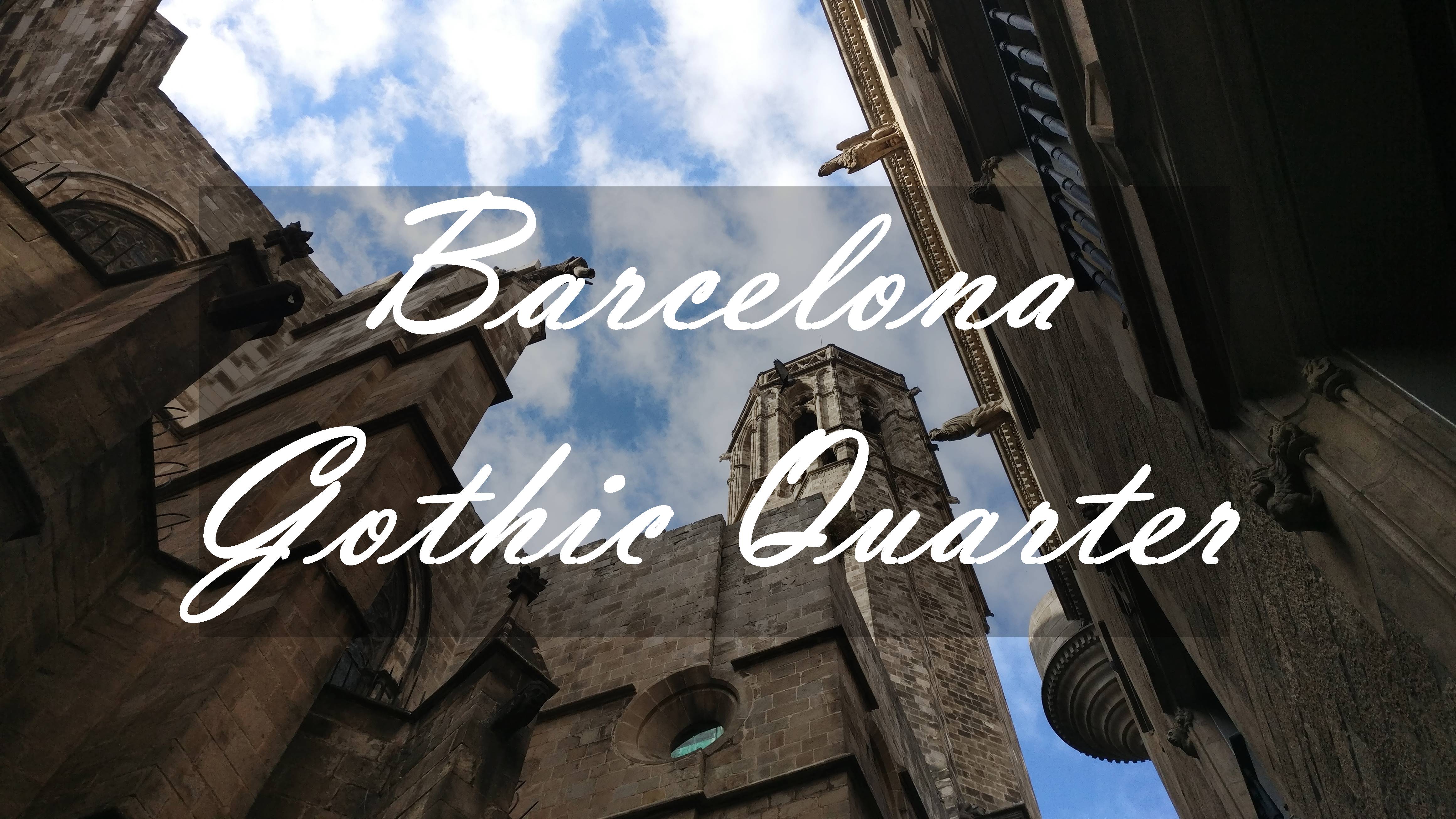 Let’s face it, Barcelona´s Gothic Quarter is one of the most visited and talked about neighborhoods in Spain. It has a history of more than 2000 years and an amazing vibe. The area is full of enchanting squares, mysterious alleyways and gargoyles staring at you. In case you are planning to take a tour of Barcelona’s Gothic Quater, there are quite a number of essential big easy big-ticket things to do you’re going to want to check off before you check out, ready? VAMOS!

Before starting, lets set our GPS properly, where is the Barcelona Gothic Quater? The answer is pretty simple. Also known as the old city, it is an area located between the famous Boulevard Las Ramblas and Via Laietana. The majestic Gothic Cathedral, on the north, is the gateway to this area which finishes by the Mediterranean sea. Now that we are set, let’s go and check the absolute best things to do when visiting Barcelona´s Gothic Quarter.

1. Mingle with the locals at their favorite Gothic hidden spot

Any Barcelona local will tell you that Plaça Sant IU is one of their favorite places in Barcelona, especially because not many tourists realize the magic and peacefulness it has. There is usually a lonely street musician playing, and if you pass the entrance of the Frederic Mares museum, you will find an idyllic cafe. 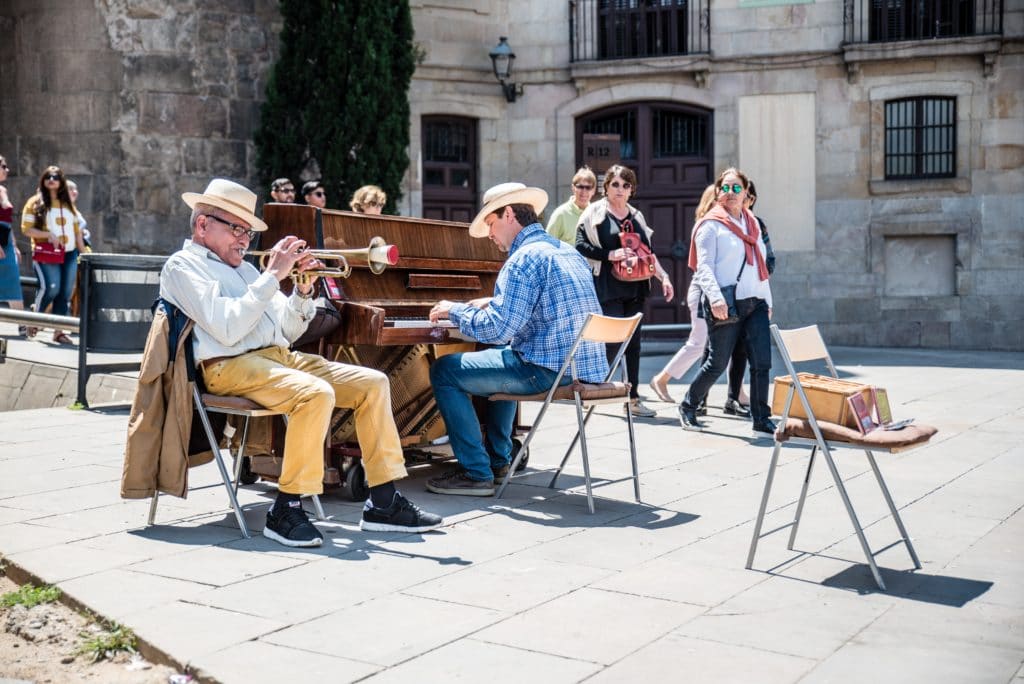 2. See and listen to live traditional jazz at Jamboree Club in Plaça Reial

One of Barcelona Jazz landmarks, Jamboree Club is located in a cave-style basement is one of the most culturally active city spots, and also an essential component of Plaça Reial´s nightlife scene where you can experience the Catalan rumba. 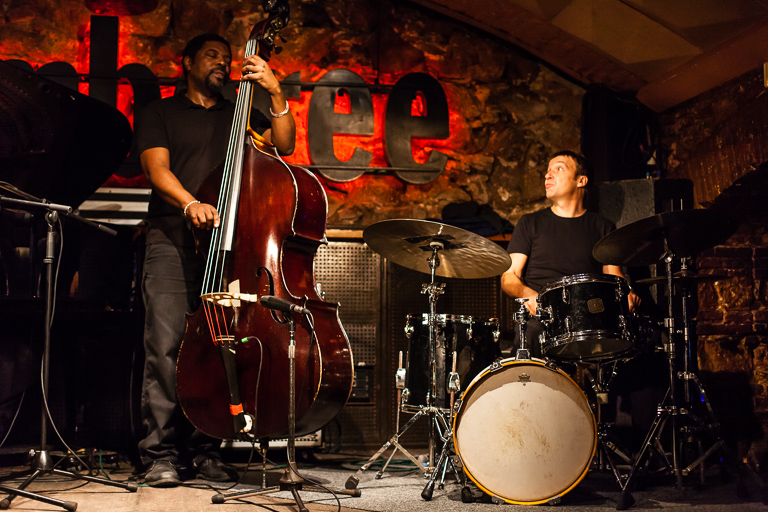 3. Take the less Gothic selfie of yourself, yet the most amazing one

The world is born in each kiss is a mural built in 2014, by a Catalan artist: Joan Fontcuberta. It is a photo mosaic that represents two mouths at a crucial moment in life, a kiss! He was inspired on a Facebook wall; a wall of affection, passion, proximity and the willingness to live. The kiss is composed of 4,000 small different tiles which are pictures donated by local residents and represent a ¨moment of freedom¨. In case you are asking yourself what to see in the Gothic Quarter, beyond all the historic sites, I really take this place as my favorite one. 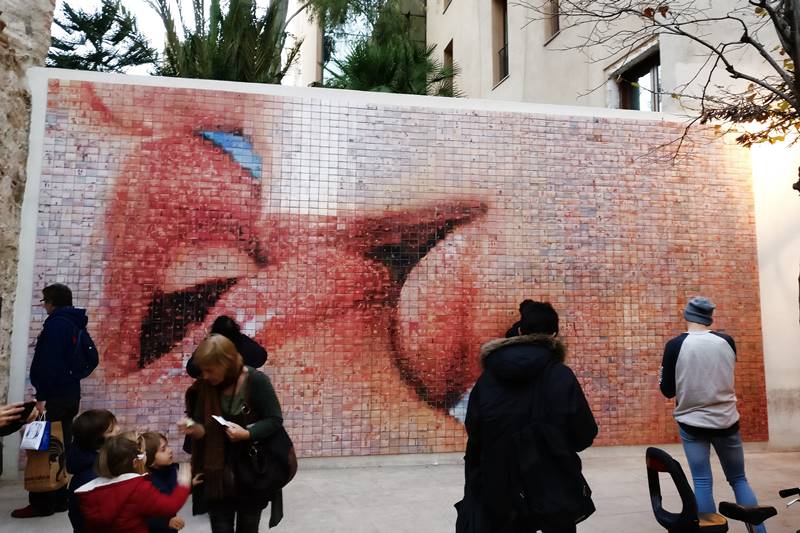 4. Indulge yourself into old school Catalan gastronomy at the Gothic Quarter

When you are hungry you´ll most probably ask google where to eat at Barcelona Gothic Quarter, and being one of the most visited areas in Barcelona, the search results will give you plenty of ¨tourist traps¨. However, be aware that there are a number of restaurants that had survived the wave of tapas commercialization and remain faithful to their “food” principles.

You can eat at Barcelona´s oldest restaurant Can Culleretes, opened since 1786! It is tucked away on a small street off Barcelona’s famous Ramblas, or have a coffee at Granja Dulcinea, which is literally a trip to Barcelona´s early 1900s. And in case you would like to experience Barcelona traditions through ancient drinks and delicious tapas, make sure you book your spot at our Food tour in the Gothic Quarter!. 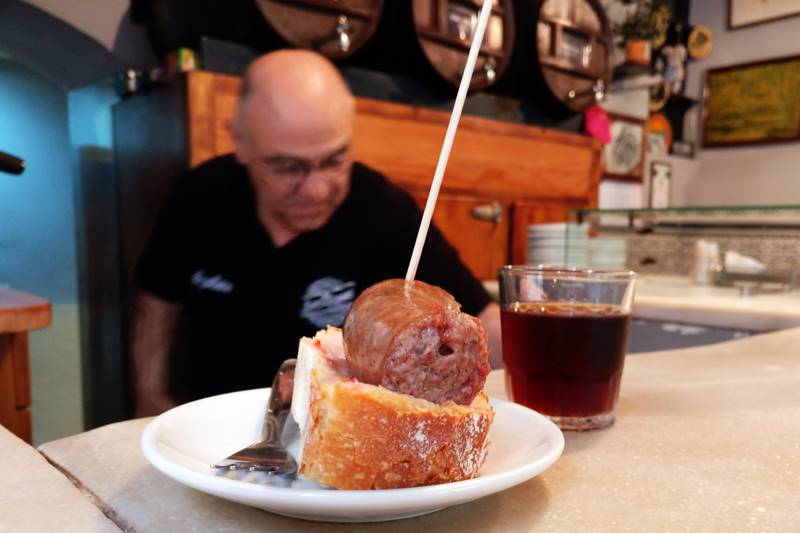 El Call, is one of the most beautiful areas of the Gothic district in Barcelona. It has the narrowest streets in the city, being Sant Domenec del Call one of the main arteries where the old synagogue is located. 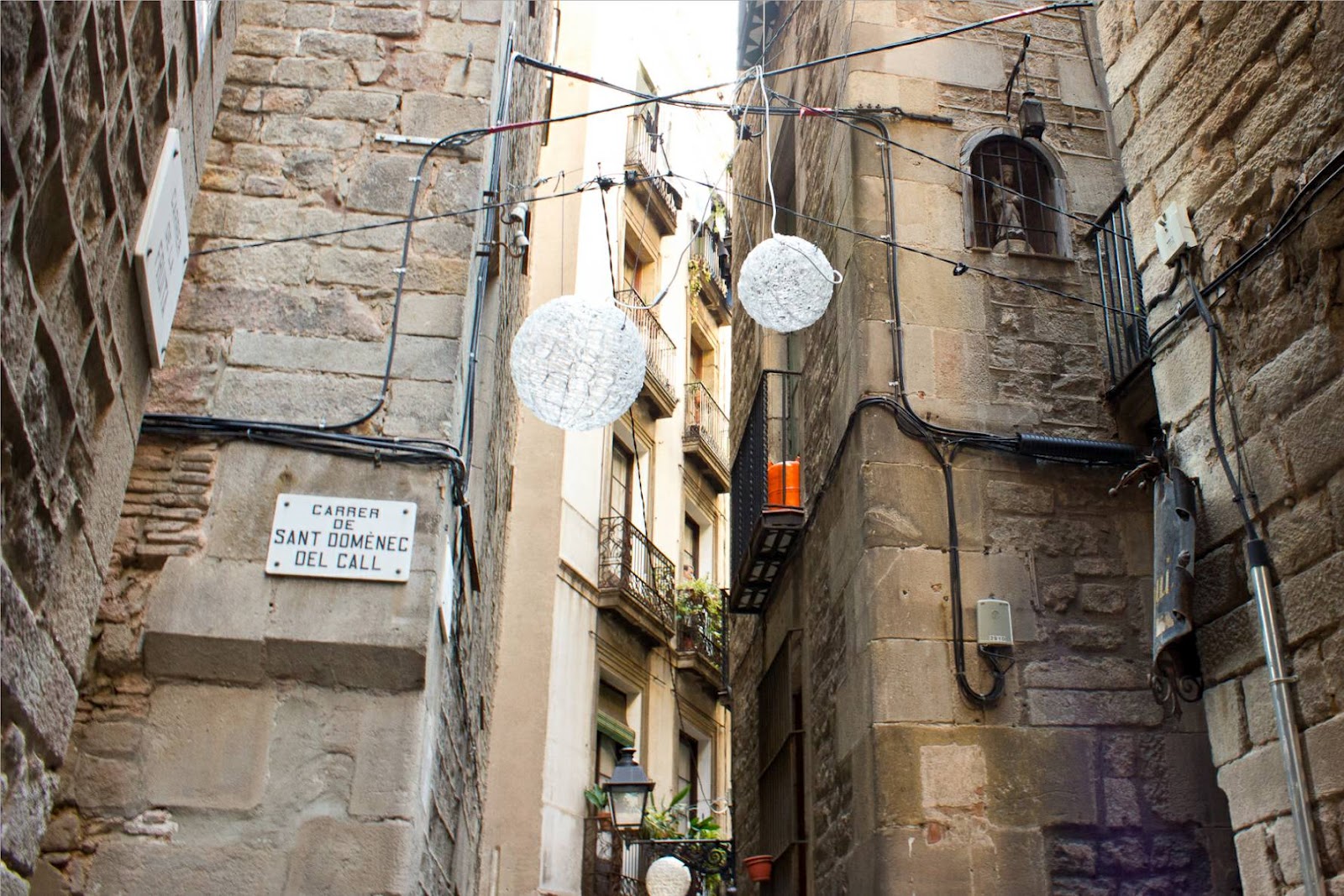 6. Play role time! Be a Roman Emperor and get to the top of Barcino (before the city was actually named Barcelona)

One of the best-kept secrets of the Barcelona Gothic Quarter are the four columns of the Roman temple of Augustus dedicated to his cult. This was the highest point in the city at the time of its foundation. The temple presided over the Forum (the central square of the Roman Barcino), named Mount Taber, at 16.9 meters above the sea level! 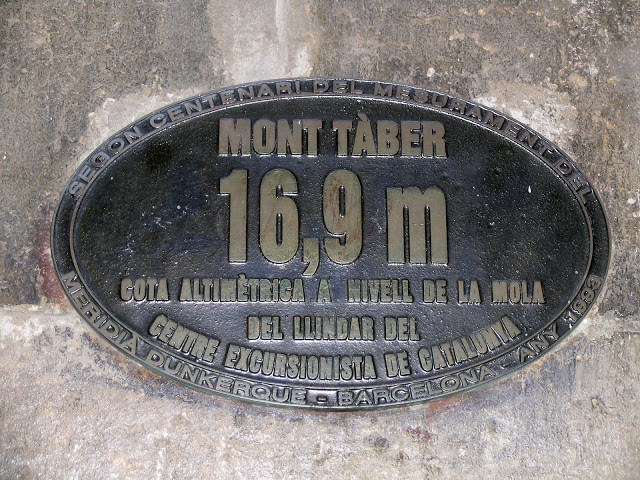 Tip: there is a very nice craft beer bar around: Craft, the owners Jordi and Joa are great people, and they serve mouthwatering pintxos paired with amazing Barcelona brews.

The Bishop´s bridge in Barcelona, where every, I mean every tourist takes a picture, hides a local legend. While you walk through you will see a skull on the bottom of the bridge, it brings you bad luck! 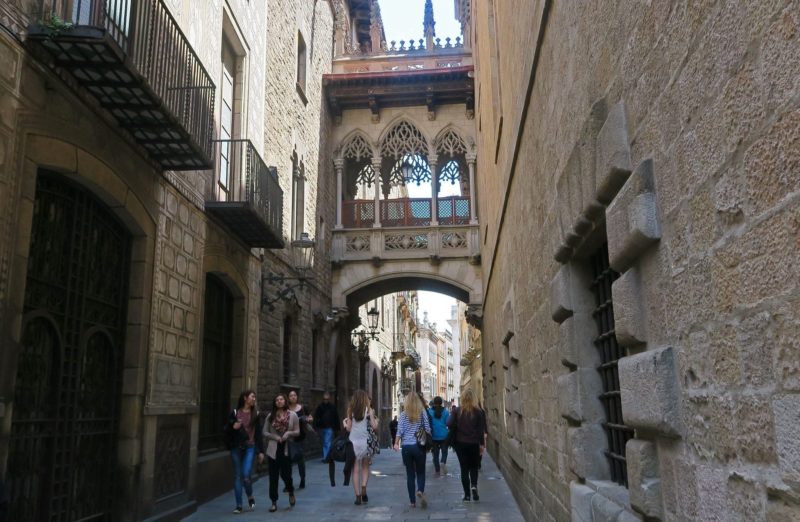 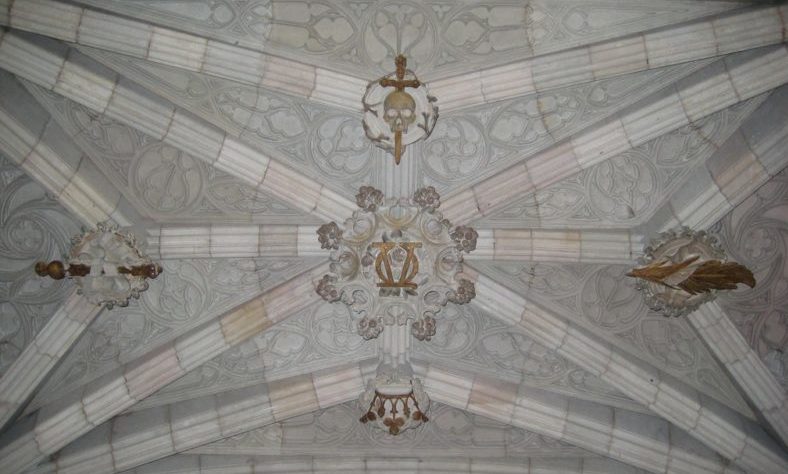 Following on the previous point, now you should find a medieval-looking building, which is not an easy task in the middle of the Gothic District in Barcelona if you know what I mean!. But you´ll certainly find a sculpture of a turtle on the wall. Just touch the turtle´s shell and your problem is solved! It is believed that this turtle brings good luck.

This kind of wall inscription, it is actually a mailbox made by Antoni Gaudi´s master: Domenech i Muntaner. Back in the XIX century, he was commissioned to refurbish this ancient building that use to be the law school of Barcelona. He made a particular interpretation of the law with this small piece of art, the birds represent the freedom of justice, the turtle how fast justice goes, and the leaves the bureaucracy of the system. Quite a vision! 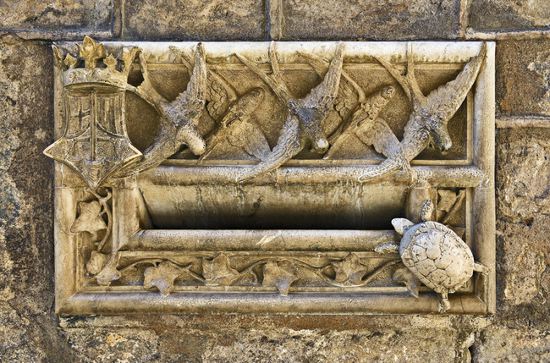 9. If you are a movie geek, find the shooting location for ¨The Perfume¨ film.

Head to Felip Neri Square, which is another hidden gem Barcelona Gothic Quarter and the entrance to the Barcelona Jewish Quarter. This tiny square used to share space with a church and the city’s shoemakers’ and coppersmiths’ guilds. It is also one of the places in Barcelona where you can see the effects of the Spanish Civil War bombings. 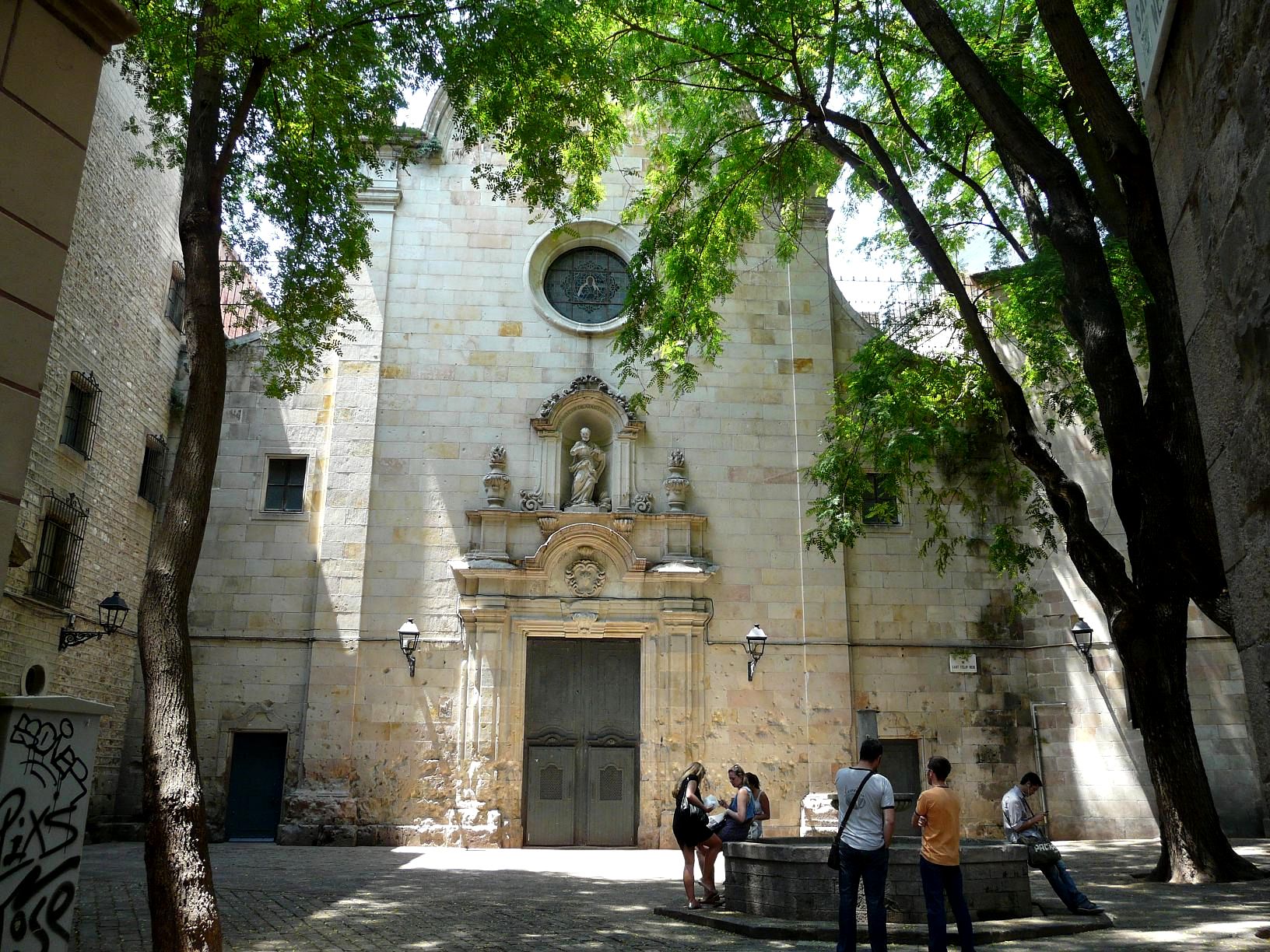 Go to Plaça de Sant Just, a quiet area with a fountain that remounts its origins to the 14th century, and that still provides fresh water to walkers who pass by. The legend says that a businessman living here, while hiking the Collserola mountains found a water-fountain and that he built a channel to his house. There is a sculpted hawk catching a partridge on his honor. 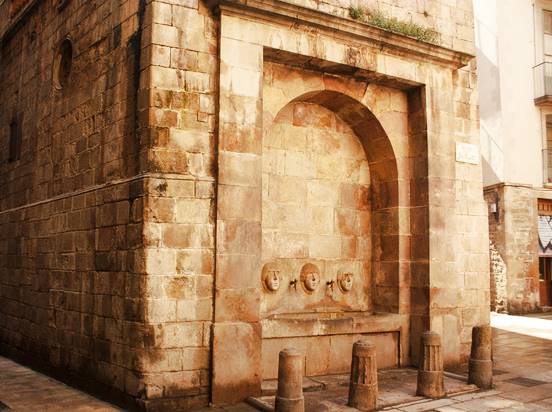 Where: Plaça de Sant Just, 4.B

11. The game is over! Aliens are invading the Gothic Quarter

Uncover the small ghost-type pixelated figure that is part of a world invasion by graffiti artist Invader, also known as Space Invader, who affixes mosaic images of characters from the 1979s-video game ¨Space Invaders¨. His project is about liberating art from its usual environment: Museums, but as well freeing the space invaders from the TV screens and to bring them to our physical world. It is quite interesting to find his works in such a historic place in Barcelona. 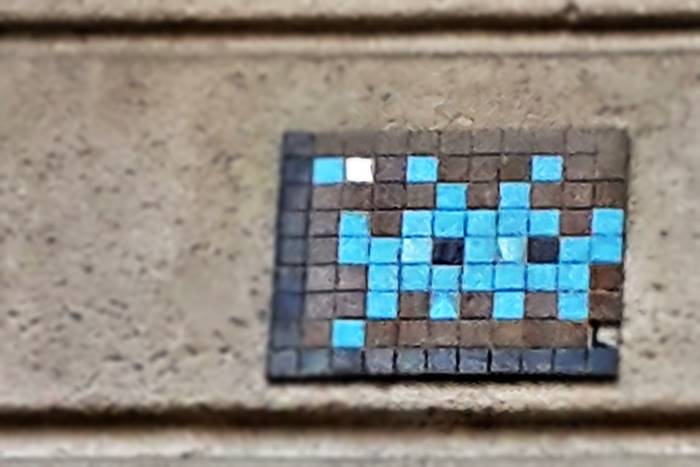 Tip: there are many other Invaders in Barcelona! Just go out and find them!

12. Go to an independent art gallery that really cares about you!

It is no surprise that we live in a society driven by consumption, and Drap-Art, a non-profit organization that promotes creative recycling, stands in the middle of a district driven by the touristic economy to raise social awareness for novel values. It is really rewarding finding this unique art gallery in the middle of the Gothic district. 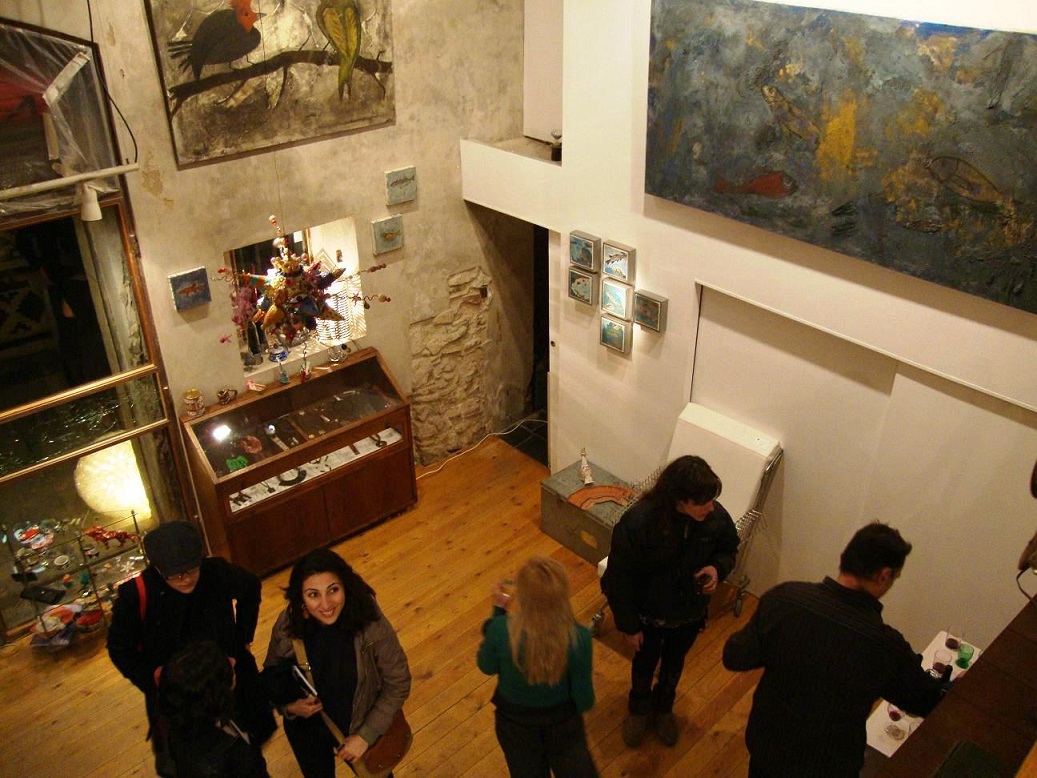 13. Bar hop all the way down Carrer dels Escudellers

There so many things to at the Gothic Quarter in Barcelona, home to curious tourists during the day and party goers during the night, plus an eclectic mix of residents. The Gothic Quarter is one of the main nightlife epicenters in the city. With so many watering holes and bars, the only hard part is choosing a pretty good bar route. Well, that and staying vertical by the time you get to the end. Salut! 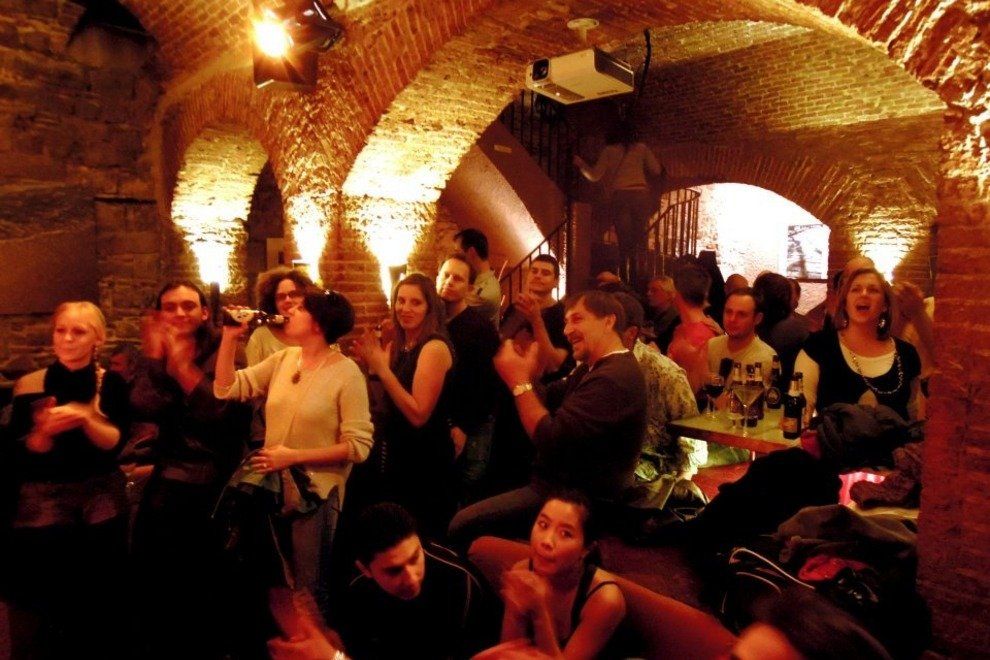 14. Admire candy handcrafting and get a bag of sweets for your next adventures

One way or another, human beings are prone to finish their city adventures with some sweets, and Papabubble, an original sweet shop founded in Barcelona, is the perfect place to end up your discovery of the Gothic Quarter. They recovered the ancient artisanal candy making process.

Anyone visiting Barcelona stops by Placa Reial, the royal square built in 1835 that boasts a bohemian atmosphere. What goes quite unnoticed is the fact that the two street lamps, surmounted by a winged helmet and a dragon, on both sides of the central fountain were designed by the young architect Antoni Gaudí.

Built in between the 13th and 15th century, the Gothic Cathedral is one of the most famous monuments to visit in Barcelona. The building has beautiful corners to uncover, especially the cloisters and patios. As well, you can go all the way up and admire views to the Gothic Quarter.

Nested in a national heritage building built between the XV-XVI centuries, the Gaudi Exhibition Center is a museum dedicated to showcasing Gaudi’s drawings, pieces, objects and writings made by the architect genius. You’ll be able to meet Gaudi through virtual reality, seriously!

Looking for more things to do in Barcelona? hungry for a taste of tapas? thirsty for a wine tasting? check out more on our blog and our foodie activities in Barcelona as we explore the city off the beaten path districts!

Liked these suggestions to uncover the best of Barcelona´s Gothic Quarter? Why not sharing on social media!