The Absolute Best Tapas in Barcelona ~ everything you need to know 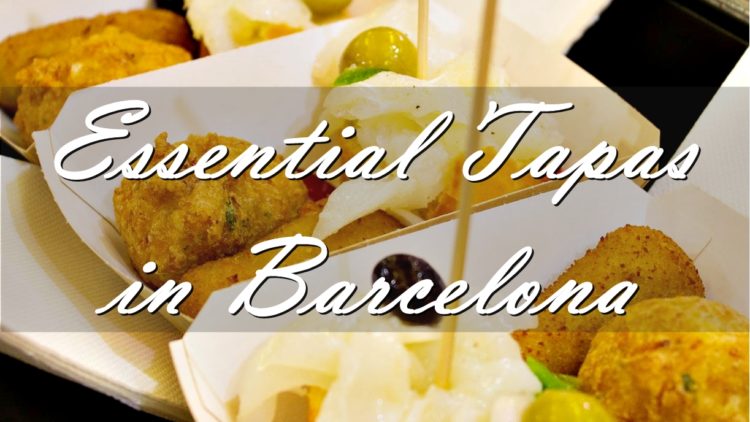 Spain is a diverse country and each region has a unique way to recreate the ¨tapas¨ concept. The first book that talks about gastronomy is written in 1477, actually in Barcelona. This city is a reference for world gastronomy. Who doesn’t visit Barcelona or Catalonia without indulging in tasty tapas?

Catalan gastronomy is rich in traditions, as in other Spanish regions. The “tapas” or “tapeo” is a concept rooted in Spanish culture. Some people say that its origins date back to Medieval days. Taverns would serve a glass of wine covered with a piece of ham to avoid flies falling inside. This concept has evolved and nowadays it refers to a group of friends sharing food in small portions. In this article we talk about the must eat tapas when visiting Barcelona, and where you can find them.

Tapas, in the end, are a way to understand life, live and share (Ferran Adria, Chef)

Try the most explosive tapa in Barcelona ~ Bombas

Originating in the windy streets of La Barceloneta district, a Bomba is a round deep fried mix of potato and minced meat. Topped with aioli and a spicy sauce when served. Where to eat Bombas in Barcelona? You should taste this tapa in one of these mythic Barceloneta bars: Bodega La Peninsular, La Bombeta or Cova Fumada. At these places, Bombas will be fresh and homemade. For more insights, check out this great documentary about the history of Bombas.

Cod fritters, bunyols in Catalan, are made following a traditional recipe that takes to Catalan homes. The ingredients for this Barcelona tapa are minced cod (desalted), flour, garlic, and parsley. They form a round ball that is deep fried in olive oil. It is a great sort of street food that you can find in Barcelona markets. Just go to any Bacallaneria (Cod Shop) and order as much as you want for takeaway. 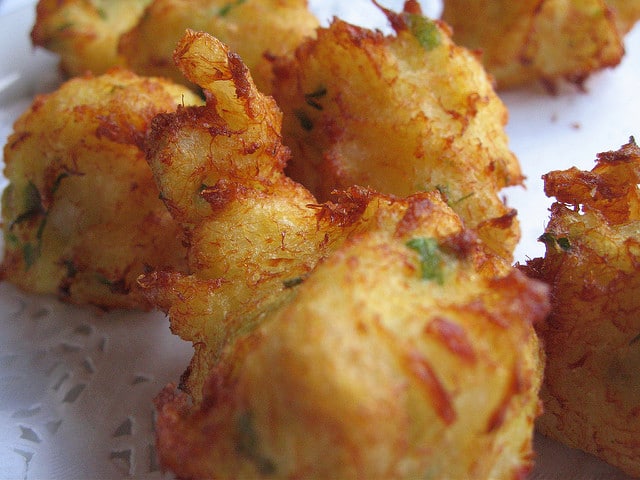 The quintessential tapa that is present on all occasions, and that each diner should prepare by himself or herself. This tapa consists of a piece of toasted bread, a local variety of tomato (called ¨de penjar¨) which is rubbed over the bread, which is then seasoned with olive oil. Delicious and also a kids’ favorite tapa!

You can find this dish in every Barcelona restaurant, you must know that this is a dish that should be prepared by you ~ that’s how locals spot the best places in town. Tapas bars such as La Pepita, El Sortidor de la Filomena Pages, Tapas 24 or Bar Calders are great places to taste pa amb tomaquet. 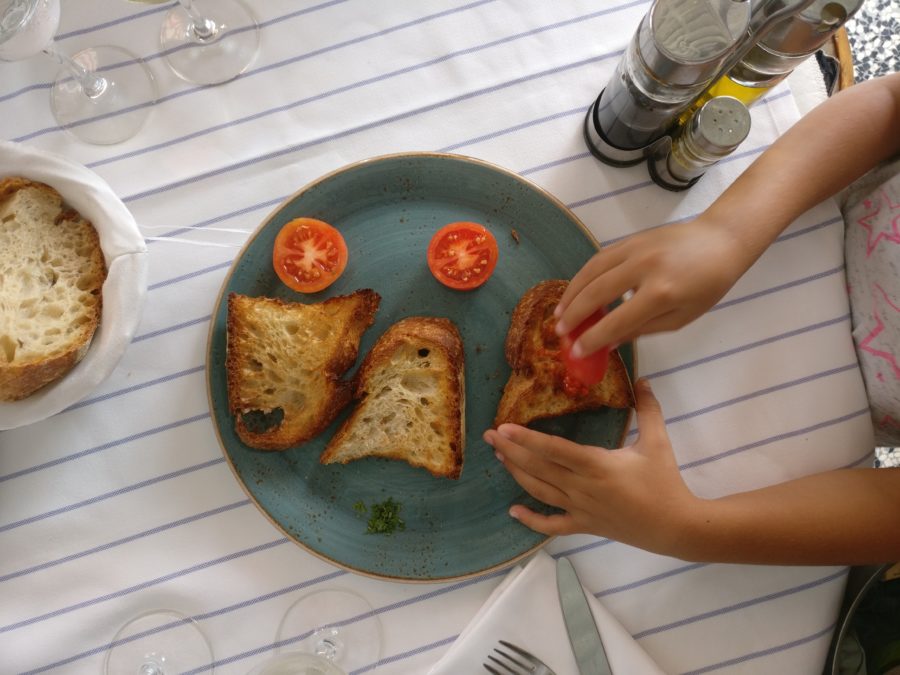 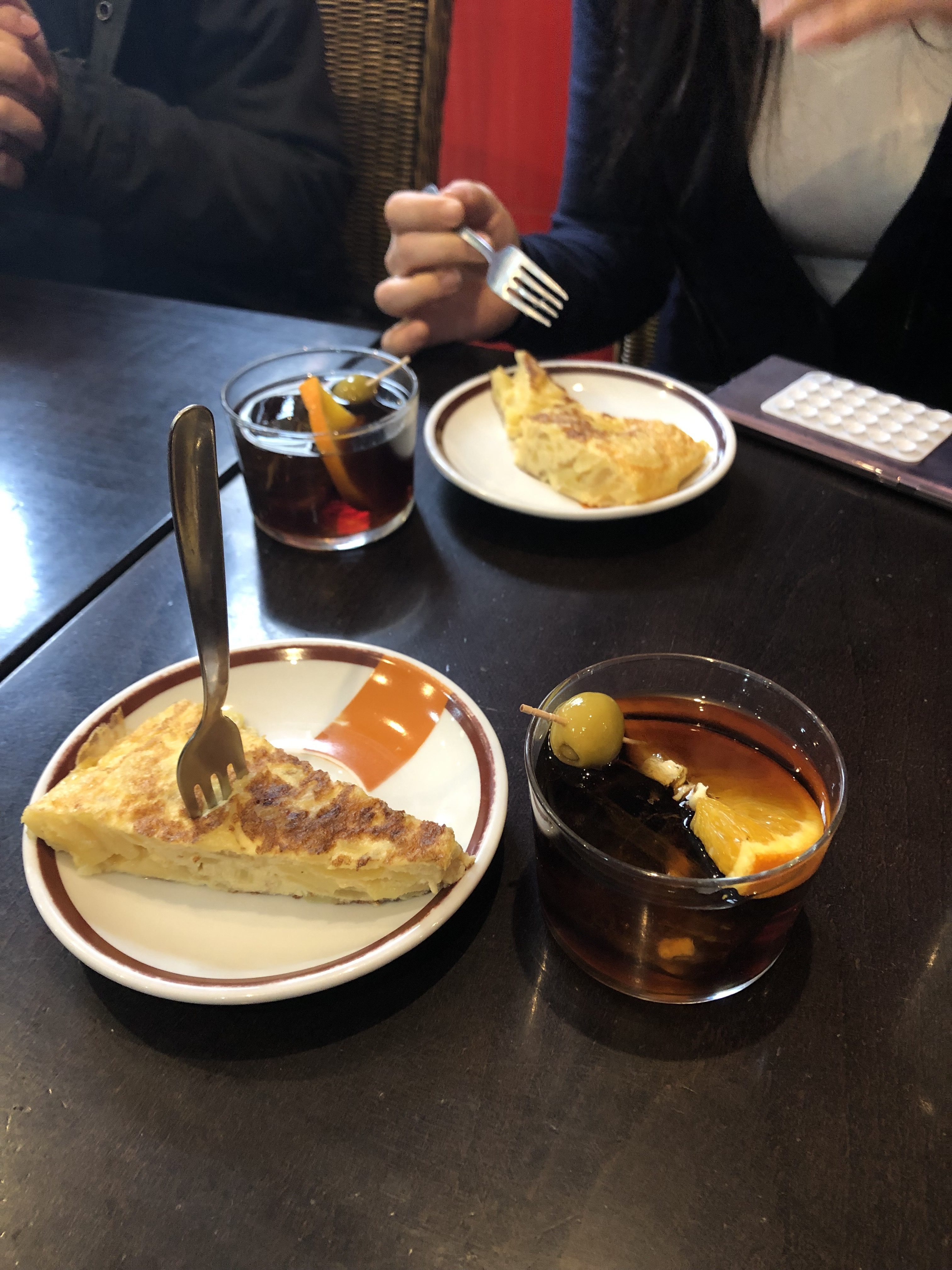 Tortilla de Patata is probably the dish that unites all Spaniards, it is famous all over the country and is subject to controversy. Tortilla de Patata, or simply tortilla, means “small potato cake” and consist of cubed or sliced layers of potato with onions and eggs.

This is a healthy and cheap dish that was created to feed the masses. Each home has a different technique to prepare it. First, the potatoes and onions need to be fried in olive oil, to a tenderness point on a pan. Then beaten eggs are added. At some point, the tortilla is flipped and cooked just a little bit more.

Before taking sides you must taste a few tortillas as there is never one exactly made as the other one. For ‘authentic’ tortilla, head to Bar Cafeteria BCN (Ronda de Sant Antoni, 13), they prepare all three types of tortilla! And in case you want to indulge in tortillas-gluttony Flash Flash prepares around 50 different types of tortilla.

The most traditional Catalan salad that is prepared with cod, tomatoes, onions, black olives, red peppers and sometimes anchovies, and boiled eggs. The best ones are found at Barcelona Markets or in our Barcelona culinary tours!.

Where to eat the best esqueixada in Barcelona? Go to Masclans Origens Bar at the Sant Antoni Market and enjoy! 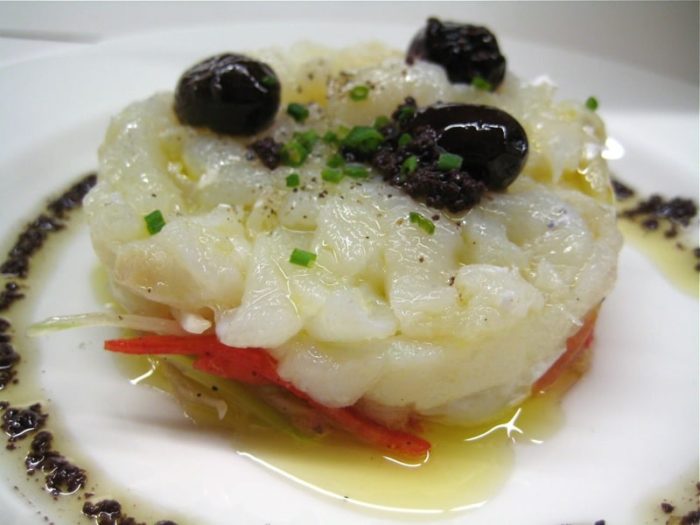 An important aspect of the Mediterranean diet is the use of fresh produce and olive oil, and this Barcelona tapa is a great representation of that simple and delicious concept. A mixed of roasted peppers, eggplant, onion, and tomatoes with a sprinkle of olive oil, optionally topped with anchovies.

Where to eat Escalivada in Barcelona? Our favorite version of escalivada is served at the restaurant Cuina d’en Garriga. 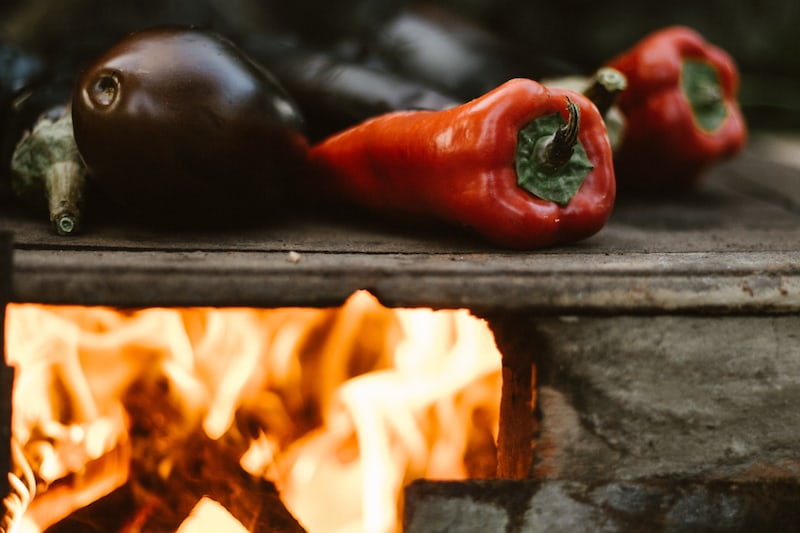 Forget about chorizo and ham, eat cured meats from the Catalan countryside ~ fuet, bull and llonganisa

Spain is a country famous for its superb cured meats. In Catalonia, the authentic ones are Bull (white or black) also know as Paltruc, it has a soft taste. The difference between white or black is that the later includes animal blood and pepper which gives a slightly stronger taste.

Most adult travelers going on a wine tour love to eat assortments of cured meats paired with local wines. Fuet is by far the kids preferred cured meat in Barcelona, cut in small slices it has an even stronger taste than Bull, but they just love it, as we do! Another similar one is llonganisa.

Our favorite spots to eat ham and cured meats are Tapas 24 and La Pepita. Both close to Gaudi Buildings. You can also buy takeaway “cucuruchos” with assorted cured meats at food stalls inside Food Markets. 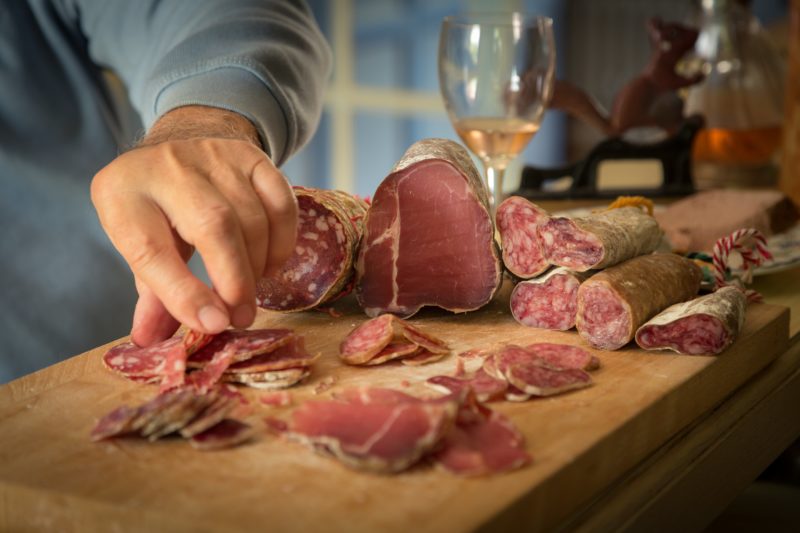 In Italy they eat pizza, in Barcelona we eat ~ Coca De Samfaina

One of the most popular street foods in Barcelona. It is a kind of thin pizza topped with sardines and samfaina, a mix of veggies that resemble the famous ratatouille (zucchini, eggplant, red and green pepper, onion, garlic, and parsley). There are also other versions of ¨coca¨, including sweet ones such as the traditional Coca de Sant Joan prepared in June during local festivities.

When walking around Barcelona, asses the bakeries in your area. Try to find a genuine one, a place where foods are not that shiny (as in the picture). You are then in a local Barcelona bakery and certainly, you’ll find a nice and tasty coca.

Locally known as cargols, this exotic tapa, genuine to Catalan cuisine, it is considered a delicacy in Barcelona. There is even a traditional celebration organized once a year in the countryside to venerate this particular dish. The most typical dish is Cargol a la Llauna, which is essentially a bunch of snails cooked in a spicy tomato sauce on a tin. Delicious and unique! 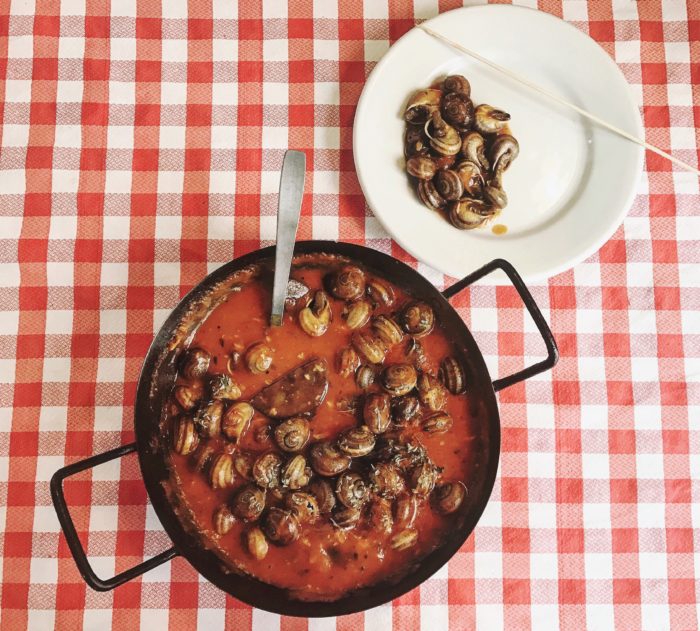 Forget about French Fries and try the delicious ~ Patatas Bravas

The quintessential tapa that everyone visiting Barcelona must try. This is a modern dish that originates in Madrid in the 60s at Casa Pellico. The potatoes are cut into cubes and deep fried in olive oil. Here in Catalonia, they are served with aioli sauce and a spicy red sauce made of red peppers, paprika, chili, dry tomatoes, and almonds. They are delicious and a cold beer should be always by their side! 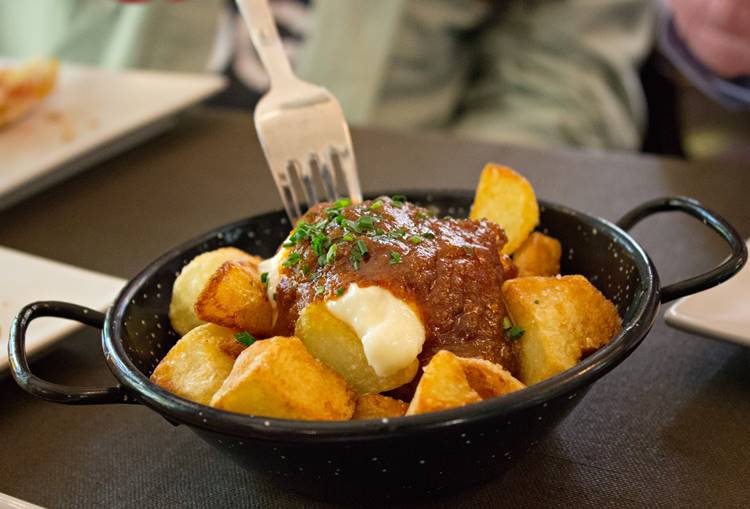 In case you are planning to visit Barcelona, you might be wondering what are the best places to eat these delicious Barcelona Tapas. Why not join one of our food tours so you will eat the best of Barcelona tapas at glance, learn tons about local gastronomy while having lots of fun.

All the best tapas lovers!