The 16 most essential things to do in El Born, Barcelona 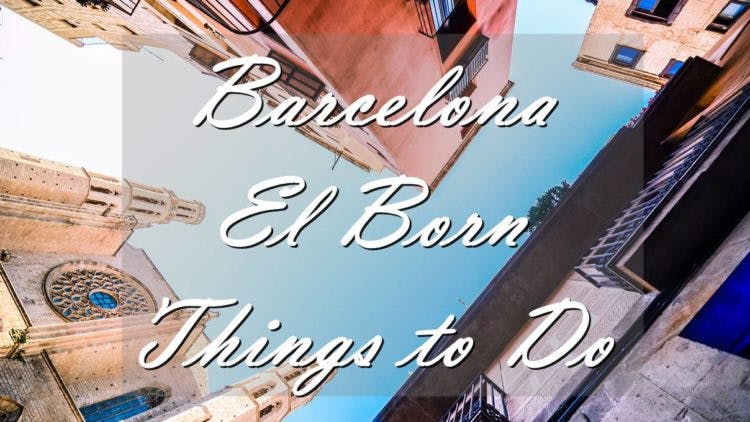 El Born in Barcelona is more than an artistic and eclectic neighborhood, it has ties to a noble past. In medieval days, it became home to the aristocracy, and the center of trade due to its proximity to the sea which gave a name to most streets. Partially destroyed during the secession war in the XVIII century, it came back to the center of Barcelona´s life with a share of innocuous antagonism for ¨the establishment¨. El Born is a unique and historical destination worthy touring in Barcelona, and before you sequester yourself on other stuff, make sure you do these essential things to do at El Born. 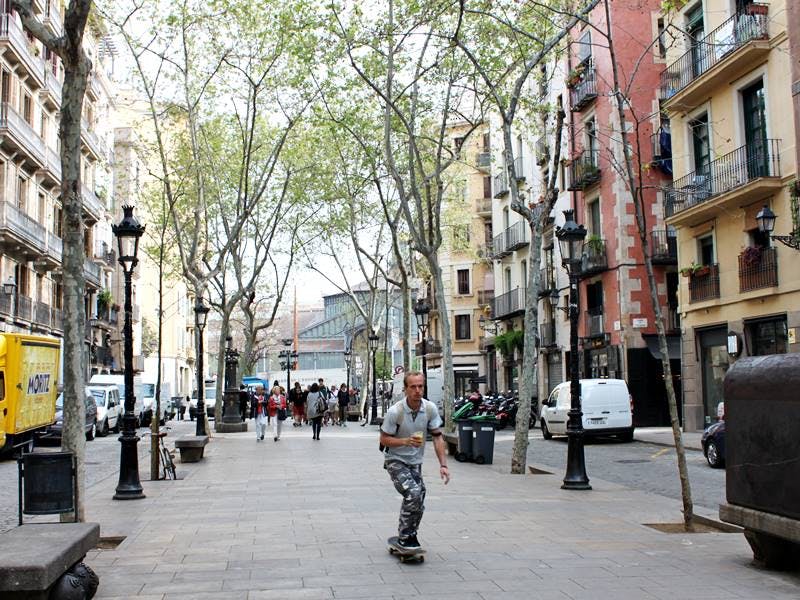 Stunning piece of art that represents the Catalan unassailably cool 20th-century artistic movement at the midst of the Industrial Revolution golden days. The whole colorful and curve pieces of the temple is a referent for Catalan cultural life that will cause you the Stendhal syndrome. 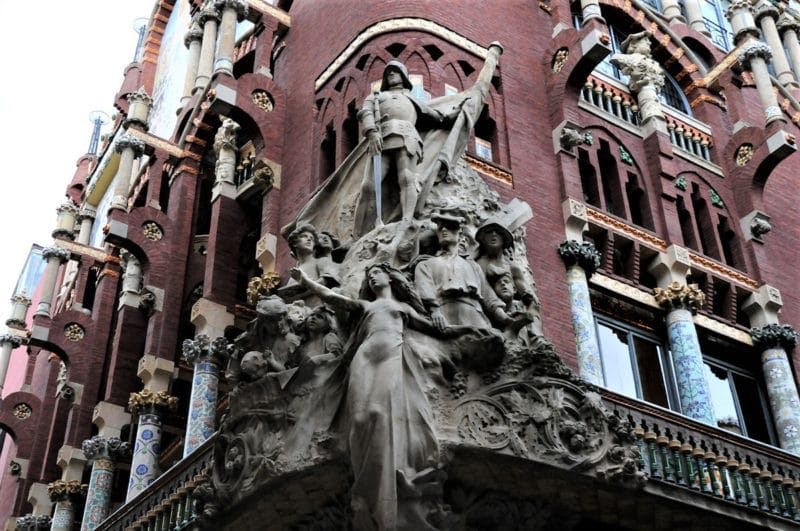 The Sant Pere Romanesque church, constructed around the 945 AD still conserve some its original relics, is the silent witness of Catalan history, and crossing its door is a travel in time. Enjoy a drink at this charming square that used to be the stage for conspiracy, intrigue, and secrets.

3. Go Wine-Hopping Stroll through the best Bodegas and Wine Bars of Barcelona

Seriously! El Born host an amazing wine scene, from old-school Bodegas to trendy wine shops and spaces where one can drink natural wines, the new trend in town. You might wanna join a Barcelona wine tasting experience where you´ll taste and learn about Spanish wines, local traditions and of course how to pair wine with delicious tapas from Barcelona. 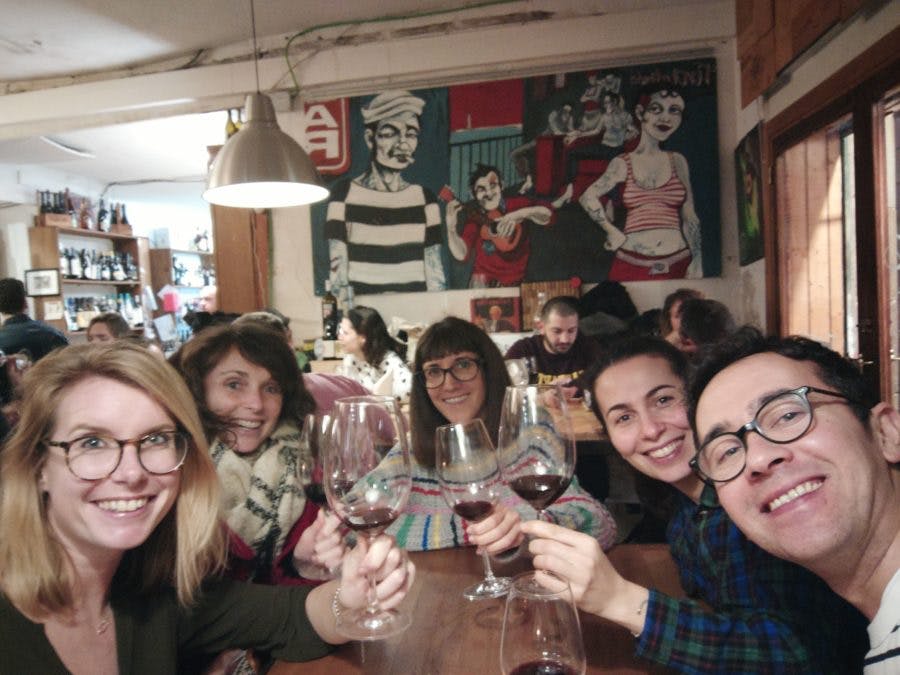 4. Eat with the locals at Mercat Santa Caterina

You visited La Boqueria and freaked out with the flock of tourists. And you are wondering how the locals can do their groceries at the city market where 1 out of 2 people are taking a selfie. Well, the second city Market: the Santa Caterina Market will give you that sense of local life you missed, and you won´t need to cue to find a spot in a tapas bar to indulge yourself in local gastronomy. This is one of the best Barcelona Food Markets. 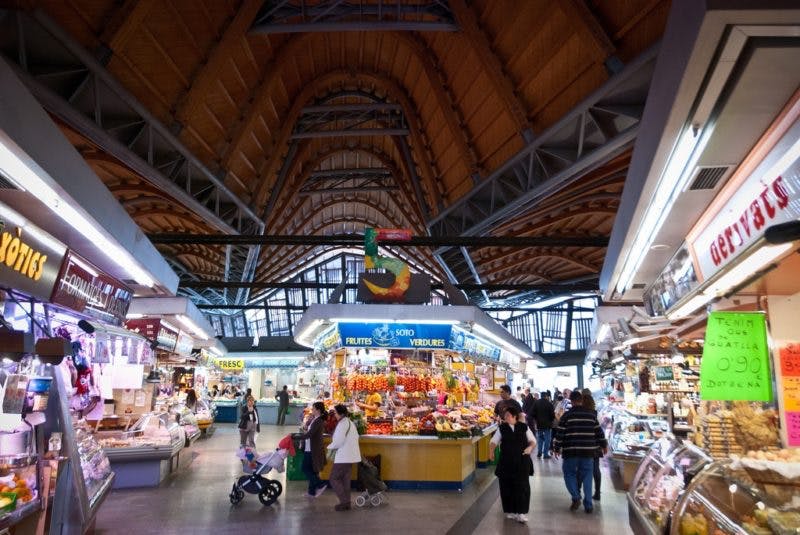 5. Enjoy your time inside a church: Santa María del Mar

Whether you are religious or not, the inside dome´s illumination deserves to be admired by everyone. Locals refer to this Barcelona church as the ¨Sea Cathedral¨, and its construction was actually financed by merchants living in the district in order to show their economic power. 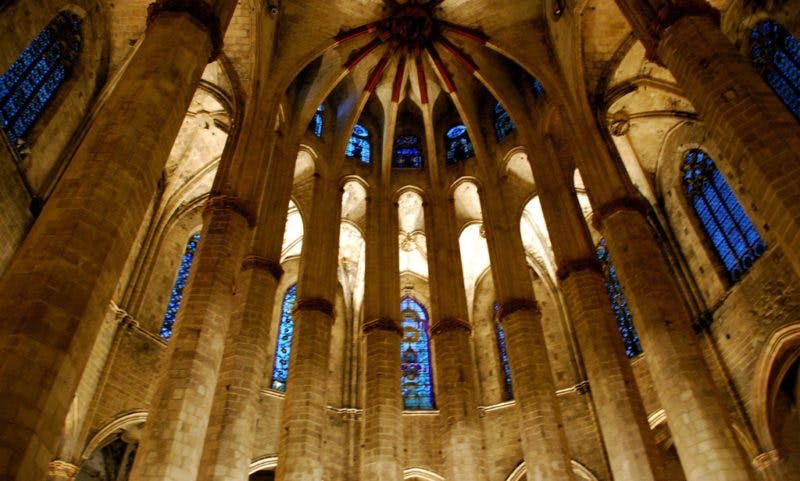 6. Meet the life of the genius: Pablo Picasso

Pablo Picasso arrived in El Born at the age of 15. And it was here where he embraced progressive ideas about art and society that led him to create Cubism. Spend some time at the Picasso Museum to uncover his intimate relation with Barcelona. Follow the route of the places where Picasso developed his work, and admire the city´s homage to Picasso by Antoni Tapies (pic below) that stand at the junction of Passeig de Picasso and the pedestrian area that links to El Born Cultural Center. 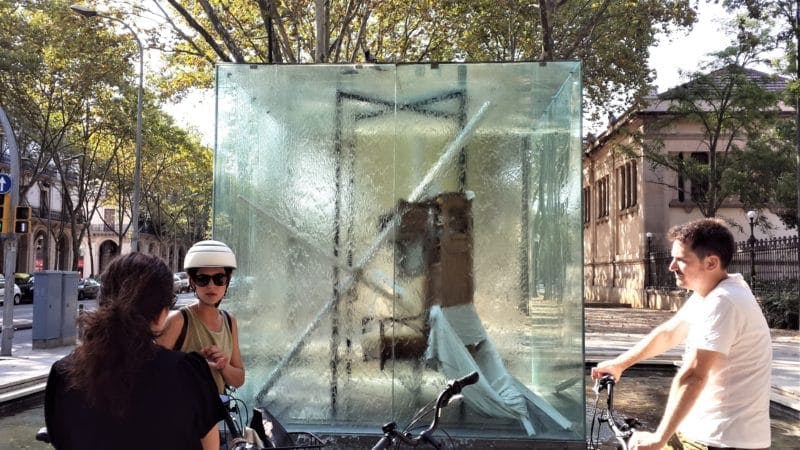 This graveyard, constructed with the same red granite used to build Lenin´s mausoleum, is the symbol of the Reapers’ War in 1640 which had its roots in the discomfort generated in Catalan society by the presence of Castilian troops during the Franco-Spanish War.

Combatants from both sides are buried here, and popular stories say that at night one can hear the click-clacks of their bones as they keep fighting with each other.

Surviving capitalism and the new trends, Casa Gispert is always packed with locals and tourists alike. The reason is simple, their products are top quality and their staff is one of the nicest in town. 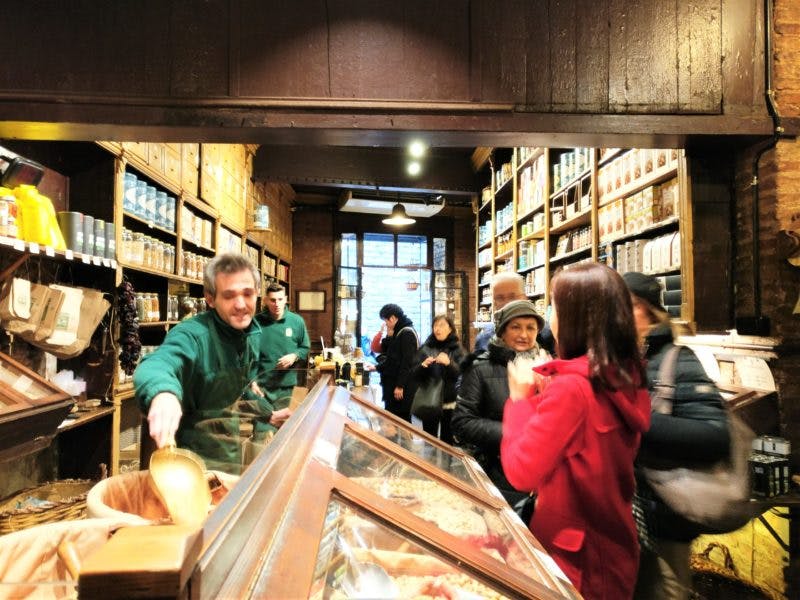 Probably the most ancient coffee roaster in Barcelona that imports genuine coffee from the famous world coffee belt. At Cafes El Magnifico, the staff has no shame in telling you that you´ll ruin your coffee with a spoon of sugar! And will offer you an authentic coffee, served on the spot or as a bag to prepare at home. 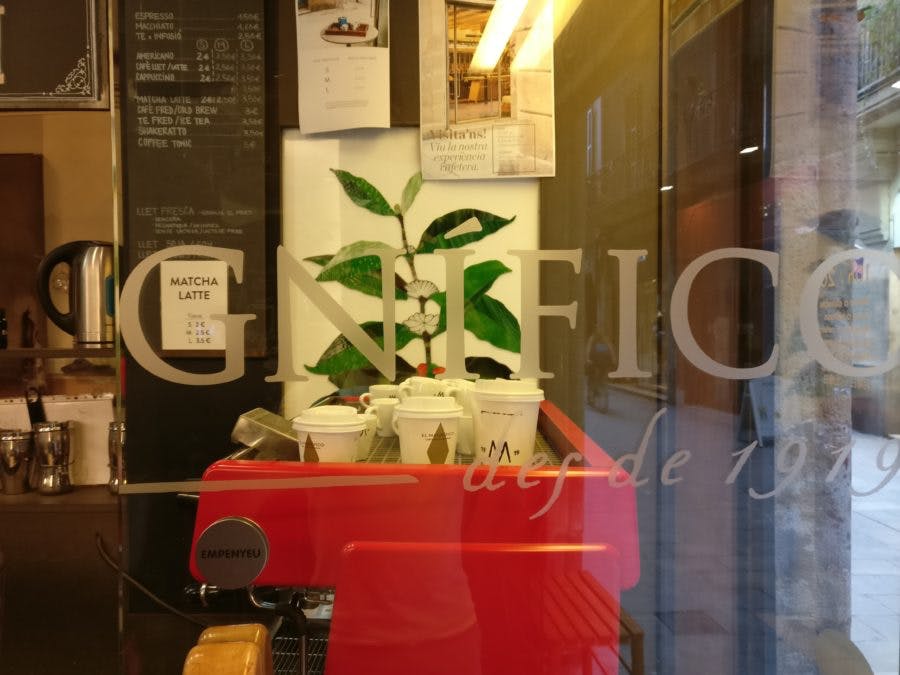 10. Go for a sweet romantic date at a hidden patio

Get sweets at the Patisserie Hoffman on Flassaders street, then walk up to Jaume Sabarter’ square, grab a seat and make yourself lovely comfortable. If things don’t work out, you are damn sure you are eating one of the best pastries in Barcelona! 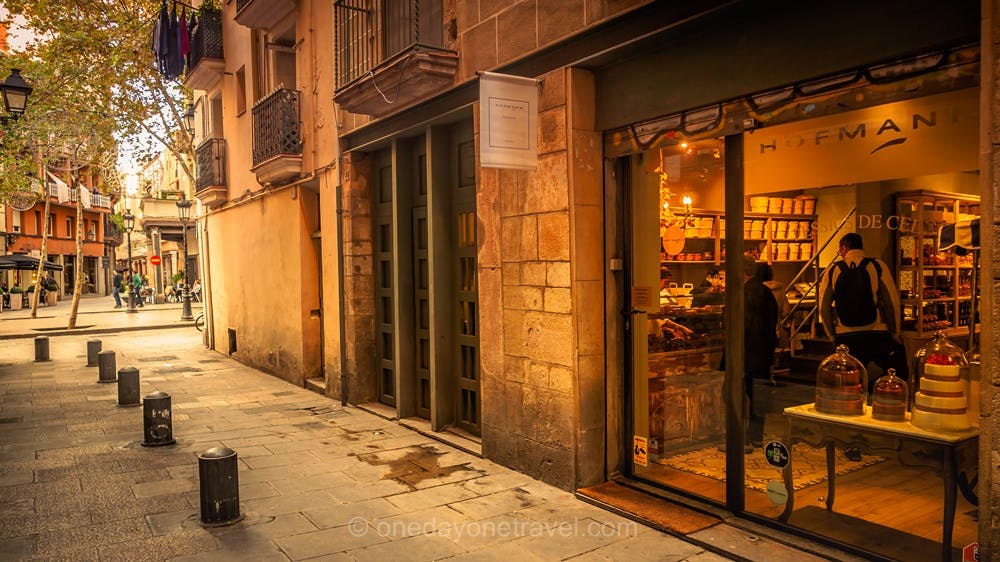 Photo credit: One day one travel

11. Find the faces that led to the dark world in medieval days

Did you know that in medieval days particular masks, locally known as Papamosques, where used to indicate the presence of a brothel? Stop at the crossroads of Carrer de Flassaders and De les Mosques and look up!

In the Catalan language, “mosques” mean flies, and this is the street where the foods from El Born market used to be stored. The name refers to the flies that accumulated while the food was rotting. Local neighbors used to joke: ¨al Carrer de les mosques, fa funcio a les fosques – at the flies’ street, there is a dark show¨. 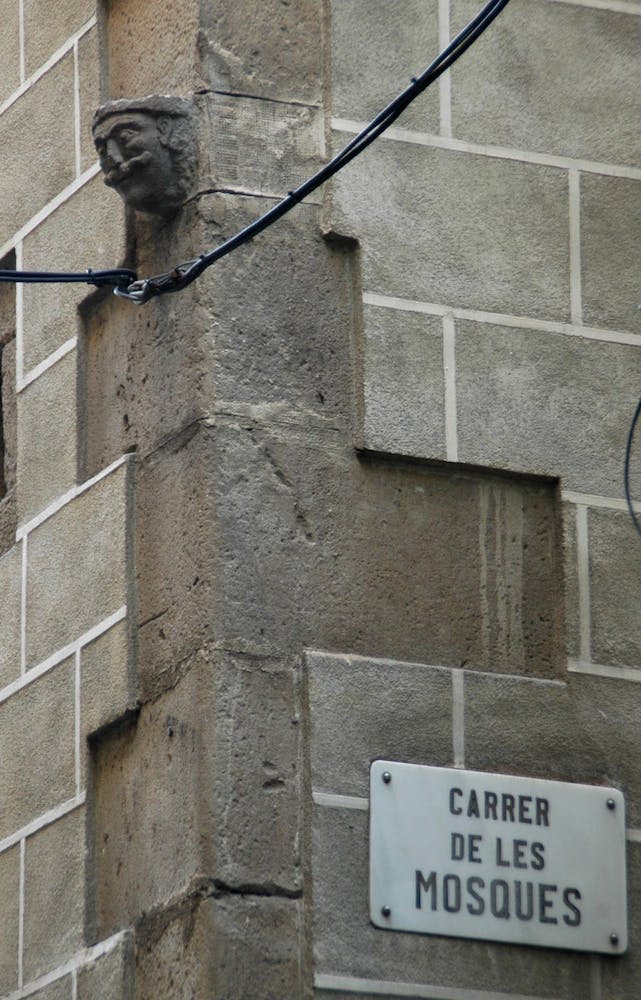 12. Get social and drink vermouth at Espai Mescladis

When it comes to celebrating tapas, the locals like to go for vermouth, and Espai Mescladis quirky ambiance is a great place to start. This place is actually a project that aims to support integration for those whose human rights have been not guaranteed.

13. Grab a drink with the anarchists at Antic Teatre.

An abandoned theater was brought back to life in 2003 by a group of artists as a social project. In order to sustain it, they opened an amazing bar that is full of human and vegetal life. The Antic Theather is an oasis in the middle of that Barcelona being saturated by mass-tourism. 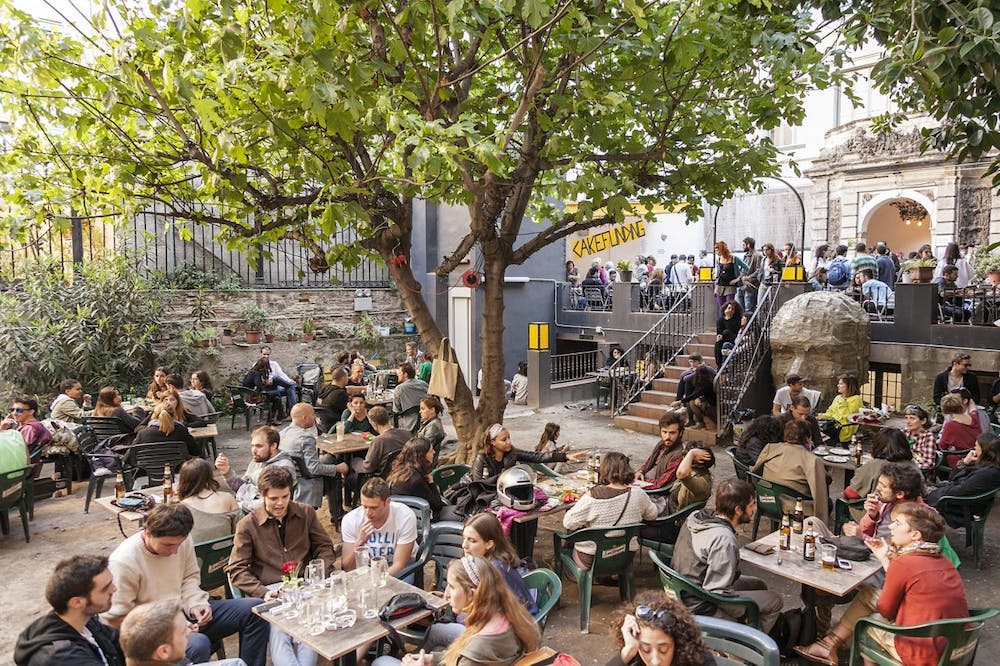 Visit this beautiful iron and glass building, locally known as El Born Centre Cultural Barcelona that houses the archaeological remains of the ancient distribution of the neighborhood, a unique way to travel to the past! 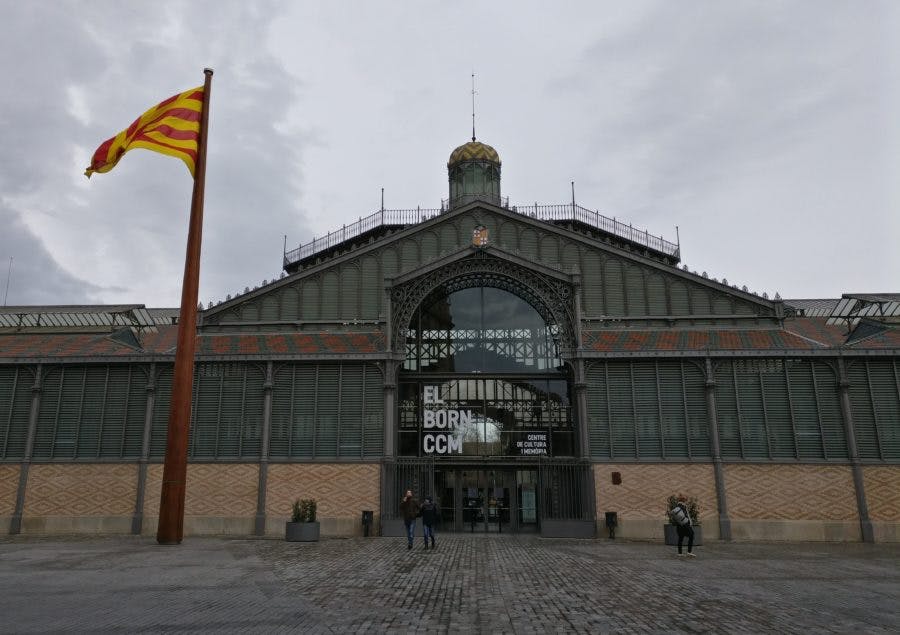 15. Get into the real Barcelona shopping experience at local designers´ boutiques

There is no better place in Barcelona to find the local designers who shape the city fashion style, we recommend you to hit Flassaders and Del Rec streets and just wander around, you will certainly do not go back empty-handed. 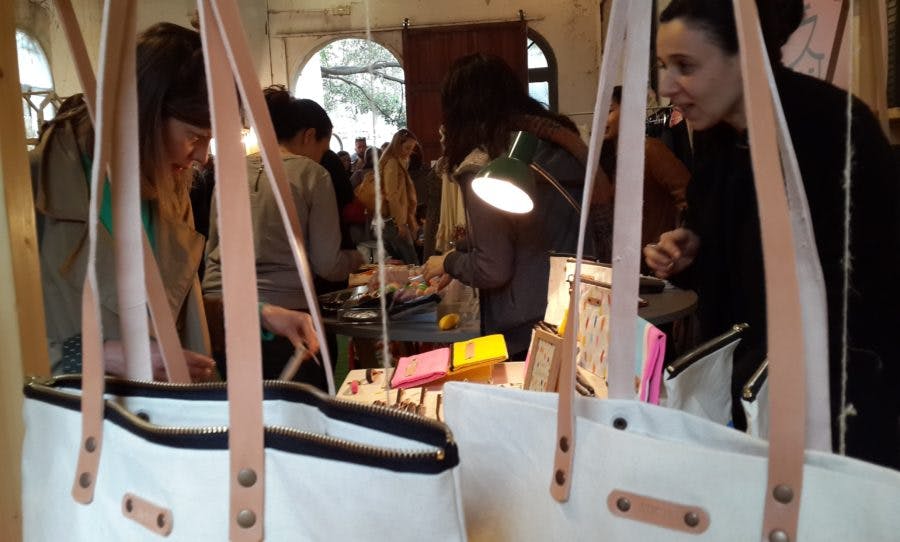 16. Bar-hop on your way to a great night in El Born

Thanks to a never-ending supply of cocktail bars, haunts that serve local wines, eclectic lounge bars, and decades-old joints, El Born nightlife keeps you going all night long. The list is long, but you can start with these bars for a genuine experience: Bar Mercaders, Ziryab or El Xampanyet. 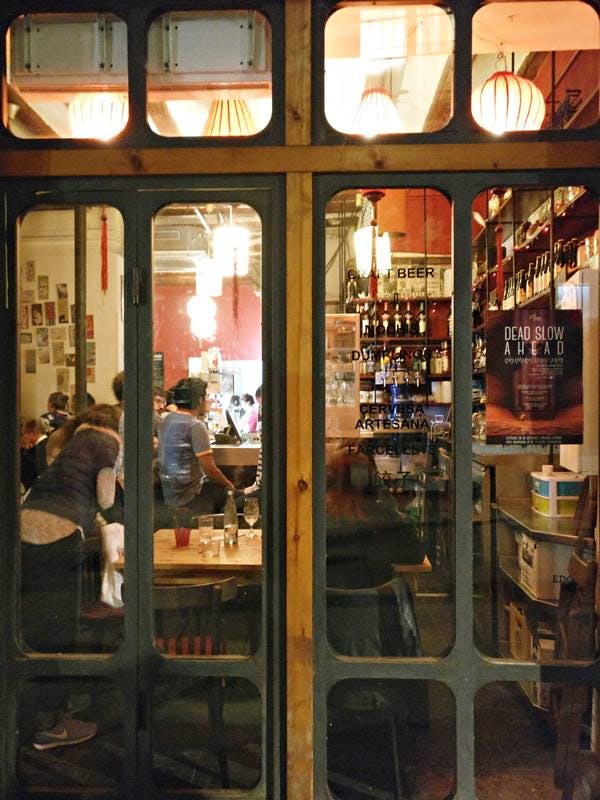 Local residents of El Born barrio have a say: ¨roda el món i torna al Born¨, which translates into ¨travel the world and come back to El Born¨. A phrase that originates from the fact that El Born was the converging point for merchants and new businesses back in medieval days, thus everyone traveling to unknown territories ended up coming back to trade.

Looking for fun things to do in Barcelona? Join us on a food tour as we uncover the culinary backstreets of this amazing city and taste some of the best tapas and drinks offered by local restaurateurs.