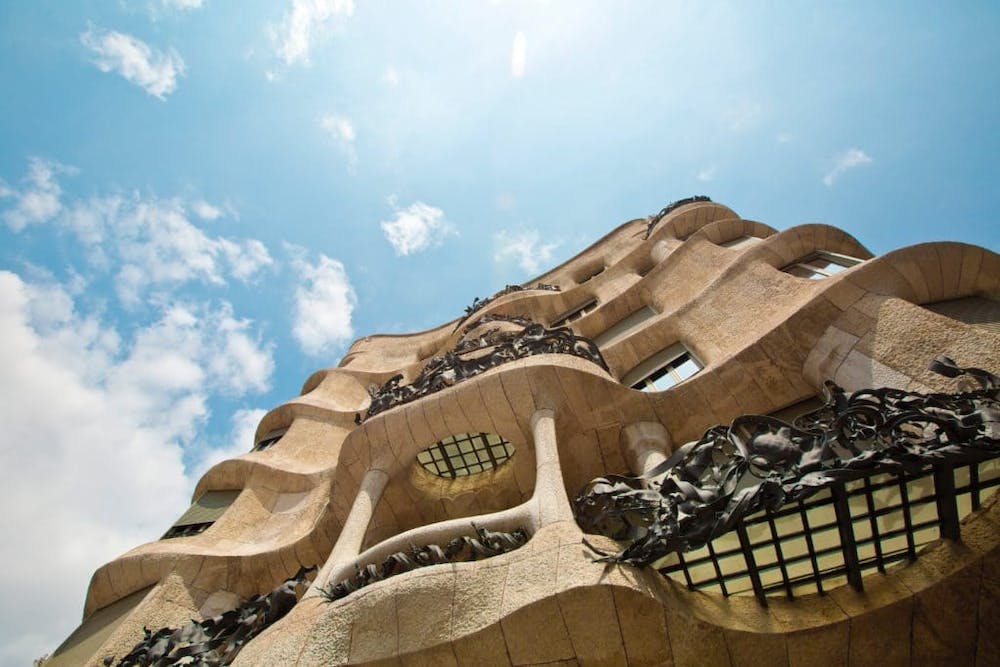 Perhaps no other city in Europe is as closely associated with architecture as Barcelona. From Antoni Gaudi, the undisputed superstar of modernist architecture to Lluís Domènech i Montaner, the architects that designed Barcelona left their signature on the very identity of the city.

On this article, you will find an extensive list of some of the best modernist architectural buildings in Barcelona, along with practical information about each of them, so you can tour Barcelona like a pro.

Casa Batlló was designed in 1904 by Antoni Gaudí, one of Barcelona’s most celebrated architects and visionaries. This building is considered to be one of his many masterpieces. The original structure was built in 1877 and remained a regular home until Gaudí was hired to remodel the building. Although Gaudí’s significant architectural changes have remained intact, the interior of Casa Batlló has been refurbished many times. To help with the remodeling process, Gaudí hired other architects, including Joan Rubió and Joseph Maria Jujol. Josep Batlló, a local textile industrialist, commissioned the home initially. All tourists above the age of six have to pay 22 euros to enter the home. 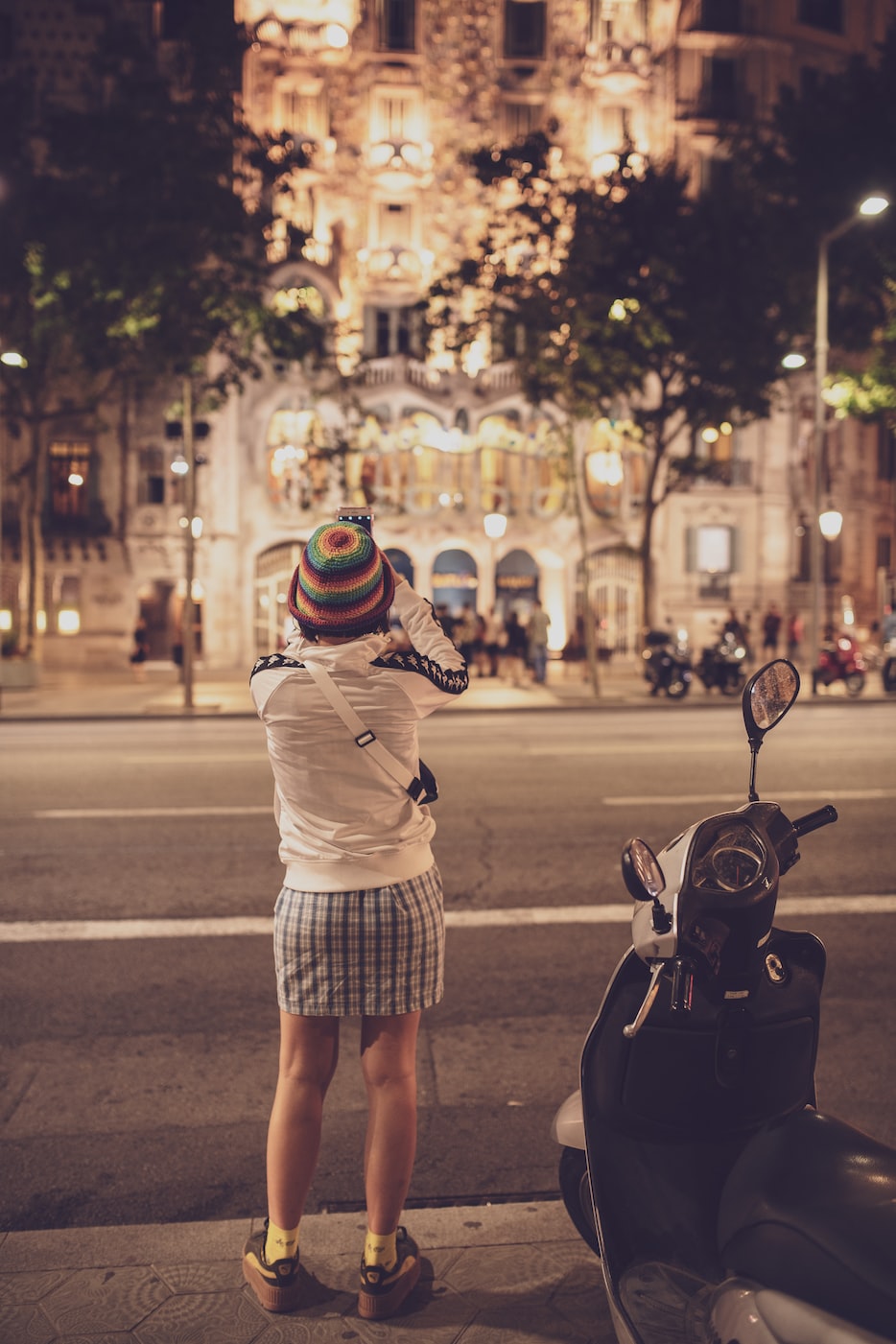 Antoni Gaudí designed many private residences during his lifetime. Casa Milà was the architect’s final contribution to the private sector. It is known colloquially as the “stone quarry,” or La Pedrera in Spanish, because of its rough appearance and light color. Gaudí started working on this building in 1906 and finished in 1912. Josep Maria Jujol helped construct this modernist building as well. The famous Mila family inhabited the first floor of Casa Milà. Visitors will need to pay 22 euros for entrance into the home. Tours at night cost 34 euros per person. 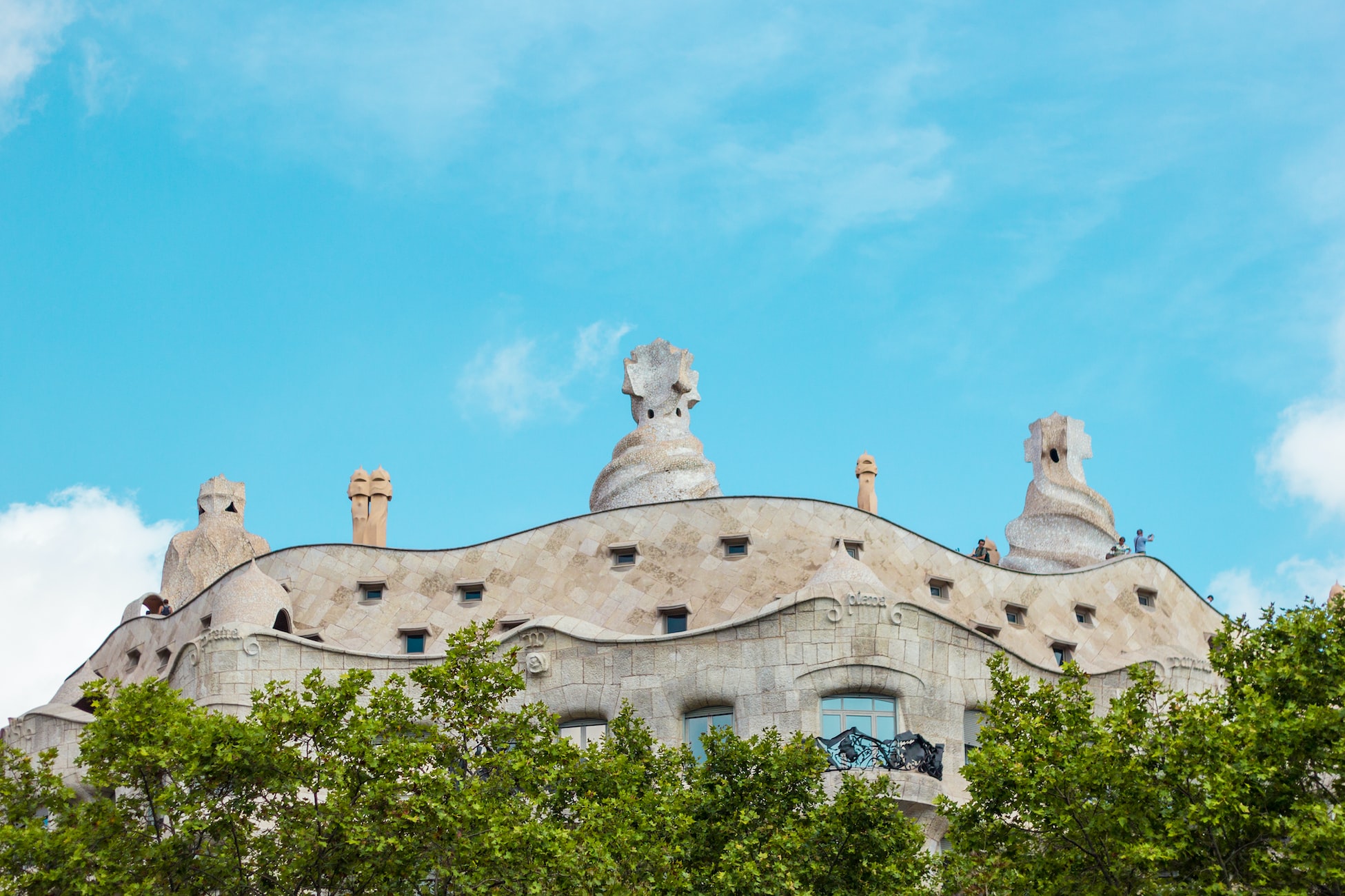 Buy your tickets to Casa Mila

Palau de la Música Catalana is one of the more elaborate modernist buildings in Barcelona. Constructed in 1905 by architect Lluís Domènech i Montaner, the concert hall was designed for a local choral society that operated as a leading force for the cultural movement in Catalan. The concert hall was completed in 1908 and has hosted thousands of plays and concerts since. A majority of the funding for Palau de la Música Catalana came from the choral society and wealthy industrialists from Barcelona. The building earned the title of UNESCO World Heritage Site in 1997. Each year, over 500,000 people visit the Palau de la Música Catalana for musical performance. Tourists are free to enter into the building for free when shows are not in progress. 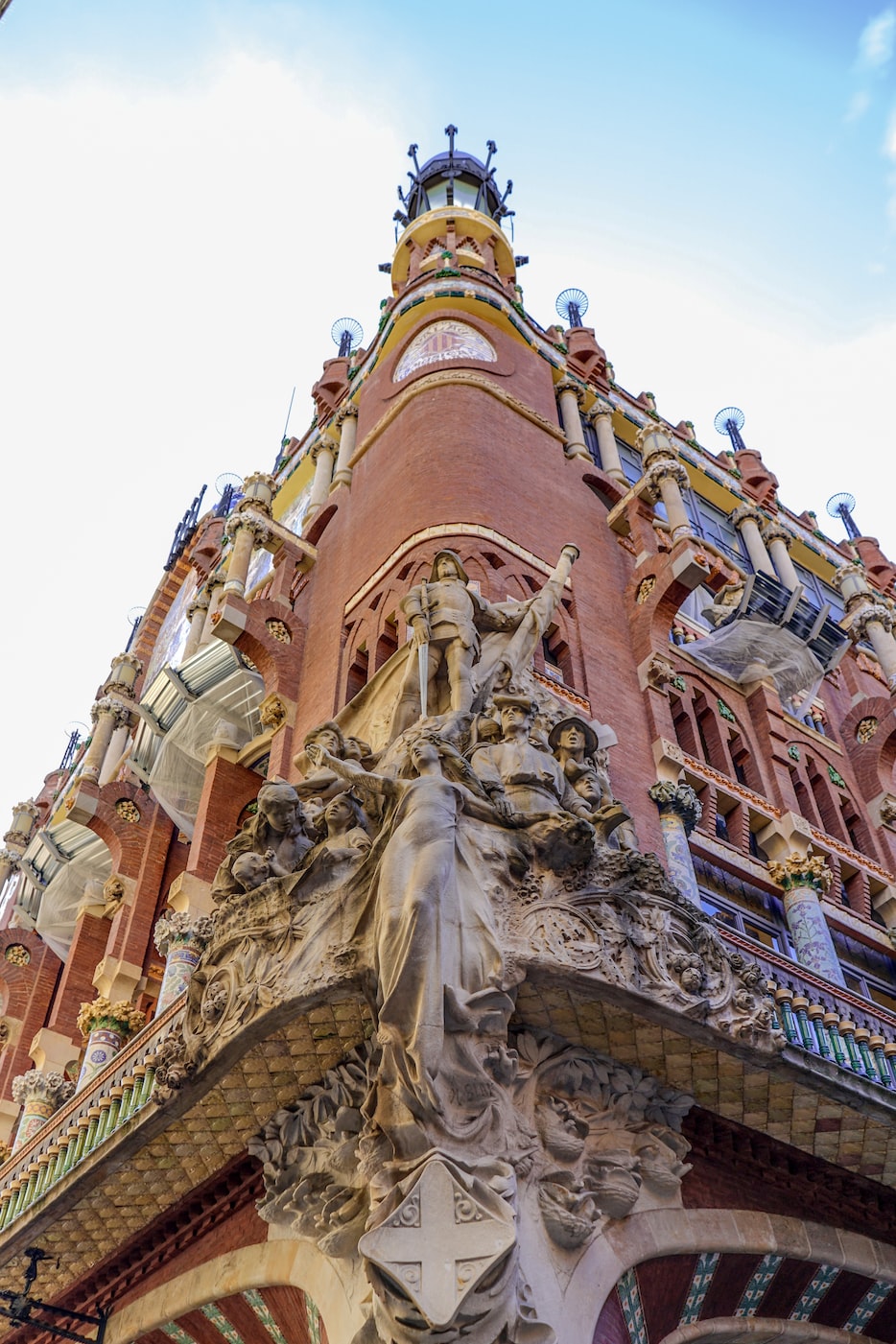 Buy a tour to the Palau de la Musica Catalana

Along with Casa Milà and Casa Batlló, Casa Amattler completes the trio of modernist buildings which comprise the iconic Illa de la Discòrdia. This street is famous for its abundance of modernist buildings. Casa Amatller is the only building in this group not designed by Antoni Gaudí. Instead, this building was constructed and designed by Josep Puig i Cadafalch. General admission is 19 euros into the house. However, there are some minor discounts for students, seniors, and children.

Buy your ticket plus a chocolate tasting tour!

In addition to Casa Milà, architect Josep Puig i Cadafalch designed and constructed Casa de les Punxes. The building is located at the intersection of three famous streets in Barcelona: Carrer Bruc, Avinguda Diagonal, and Carrer Rosselló. Bartomeu Terradas Brutau requested that the house be constructed for his three sisters, Rosa, Josefa, and Angela. The building is one of the more iconic structures in Barcelona and resembles medieval castles. There are six towers on Casa de les Punxes that have varying technical innovations and architectural trends. It is known as a local masterpiece and is more affordable than other modernist buildings in Barcelona. Visitors only have to pay 13.50 euros to enter.

El Pabellón de Barcelona was designed by Lilly Reich and Ludwig Mies van der Rohe. It is one of the only pieces of modern architecture in the city which wasn’t created by a local architect. El Pabellón de Barcelona was initially called the German Pavilion and was part of the International Exposition that was held in Barcelona in 1929. This modernist building was being used as the official location for the German portion of the exhibition. As one of the most affordable museums on this list, visitors only have to a 5 euro entrance fee.

Torre Agbar, also known as Torre Glòries, is one of the only skyscrapers to grace Barcelona’s beautiful skyline. In fact, Torre Agbar is the third-tallest tower in Barcelona with an impressive height of 472 feet or 144 meters. This iconic building acts as a gateway into the technological district that is new to Barcelona. Fermín Vázquez Huarte-Mendicoa and Jean Nouvel designed Torre Agbar. The skyscraper is partially open to the public. Offices and other private areas of the building are restricted. The building opens at 9 am and closes at 6 am. At night, Torre Agbar illuminates with several different colors and patterns. It’s an exciting component of the Barcelona skyline. 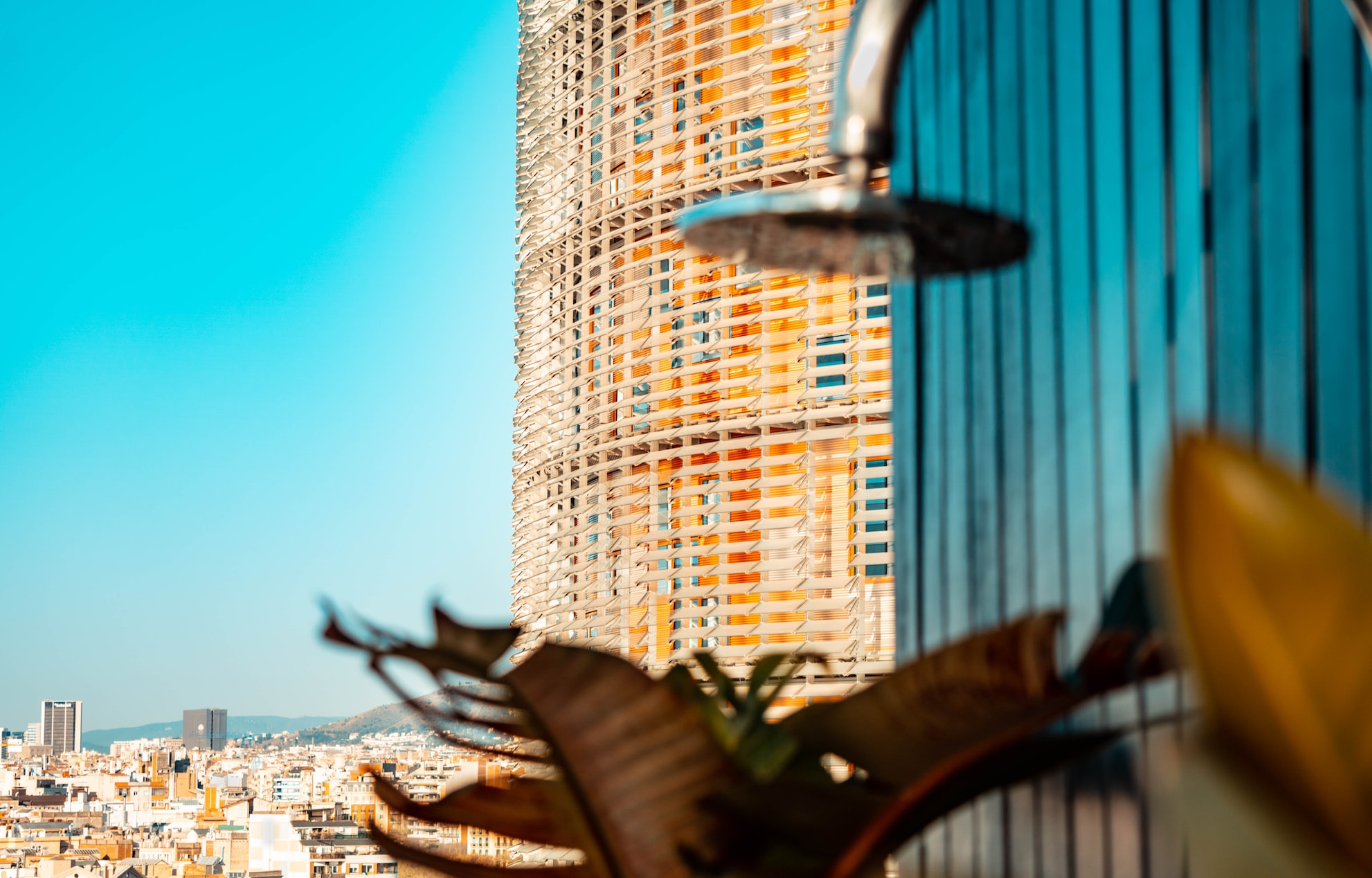 Museu del Modernisme Català, also known as the Museum of Catalan Modernism, houses some of the most iconic works of modernism related to the area of Catalonia and the city of Barcelona. The museum is housed in an abandoned textile factory that has been converted and redesigned by architect Enric Sagnier. The Museum of Catalan Modernism is located in the Eixample district. Modernism was a meaningful and powerful movement that started in the city in the late 19th century. This museum shares a history of this movement through works of art. General admission to the museum is 10 euros. There are many discounts for the elderly, children, and students. Visitors can pay a little extra to receive a guided tour. 10. The Castle of the Three Dragons

Lluís Domènech i Montaner was commissioned to create a restaurant and cafe for the Universal Exposition of Barcelona event in 1888. The modernist architecture ended up creating one of the most iconic and memorable buildings in Barcelona. The building is known as the Castle of the Three Dragons. It is thought that the nickname was derived from Serafií Pitarra’s play by the same name. The Castle of the Three Dragons opened up to the public in 1888 and has been visited by millions of tourists since. It is quite close to the beautiful El Born district.

This is the Castell dels Tres Dragons (Castle of the Three Dragons) on the edge of the Parc de la Ciutadella. This is the first example of modernista architecture #spain #espana #españa #barcelona #modernista #architecture #castelldelstresdragons #castleofthethreedragons #cataluña #catalunya #catalonia #domenechimontaner #parcdelaciutadella

We hope our guide will be helpful in finding your way around the magnificent modernist buildings of Barcelona. If you want to explore the city and its architecture without carrying heavy bags with you, consider storing your luggage in Barcelona. Being as light as possible will make your excursion a lot more enjoyable!